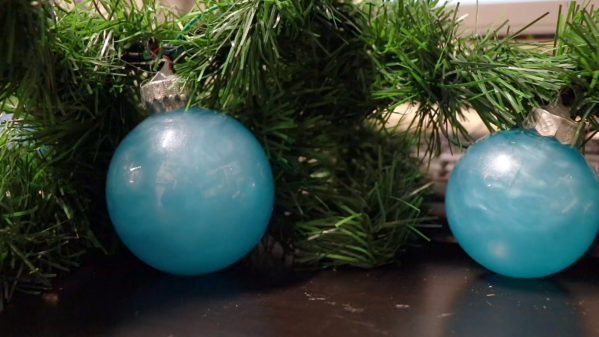 We had to look it up on Wikipedia – “Rheoscopic fluid means ‘current showing’ fluid. Such fluids are effective in visualizing dynamic currents in fluids, such as convection and laminar flow. They have microscopic crystalline platelets such as mica, metallic flakes, or fish scales, in suspension in a fluid such as water or glycol stearate.” And so it seems [Will Donaldson] has figured out a great way to Animate Christmas Ornaments using Rheoscopic Fluid, just in time for the holiday season.

Making the fluid is pretty simple, and uses just a few readily available materials – distilled water, rheoscopic fluid concentrate and your choice of food colouring. The hardware is dead simple too – clear, spherical baubles with lids and core-less DC motors such as used in mini and nano drones, to agitate the fluid. You can use cell phone vibration motors too, but [Will]’s experimentation suggests that the level of agitation is not a lot.

To make a bauble, you fill it with the fluid, hot glue the motor to the lid, close the lid such that the motor and its agitator are dunked in the fluid, and dab a generous amount of hot melt glue to seal it all shut. Then, hook it up to a suitable power supply and get enchanted by the mesmerising movements of the rheoscopic fluid in the bauble. The agitator is just a plain ol’ drone propeller forced in to a shape that is narrow enough to be pushed through the neck of the bauble. It’s a seasonal ornament, so don’t expect the motors to last long being submerged in the rheoscopic fluid. [Will]’s contraptions have not yet failed after a couple of days, and it may be safe to estimate that the motors may last about a week or two at most. Of course, YMMV depending on if you used distilled water or plain tap water and other factors.

As [Will] suggests, if you prefer slower swirls, or random agitation, then it’s best to hook up a micro-controller and motor driver for fancy effects. At this point, it may be tempting to think of embedding LED’s inside the baubles, but doing so reduces the rheoscopic effect since it relies on reflecting light shining on it from the outside. The video embedded after the break has all the build details.

It’s a great way to teach some science to the kids during the holidays and maybe even get them to help with the project. And don’t assume this is just a cheap Christmas trick. Artist Paul Matisse has invented an art device/technique based on rheoscopic fluids which he calls “Kalliroscope©”. He patented it in 1968, and has sold Kalliroscope artworks throughout the world since then. From his website “A Kalliroscope is a device for viewing fluid currents. Kalliroscopes are both works of art and intuitively educational displays of the scientific principles of fluid dynamics. They are glass and steel constructions containing a current-visualizing fluid.” We’re not sure how priceless those works of art are, but it’s safe to assume you need deep pockets to buy one. So go ahead, turn your Christmas Tree in to a work of Art !