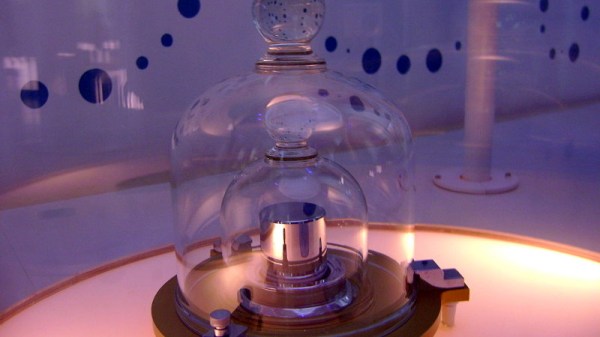 For nearly 130 years, the kilogram has been defined by a small platinum and iridium cylinder sitting in a vault outside Paris. Every other unit of measurement is defined by reproducible physical phenomenon; the second is a precise number of oscillations of a cesium atom, and a meter is the length light travels in 1/299792458th of a second. Only the kilogram is defined by an actual object, until NIST and the International Committee of Weights and Measures defines it as a function of the Planck constant. How do you measure the Planck constant? With a Watt balance. How do you build a Watt balance? With Lego, of course.

A Watt balance looks like a double-armed scale where one weight can be compared to another weight of known mass. Instead of using two arms, a Watt balance only has one arm, brought into balance by a current flowing through a coil. The mechanical power in the balance – brought about by whatever is on the balance plate – can then be compared to the electrical power, and eventually the Planck constant. This will soon be part of the formal definition of the kilogram, and yes, a machine to measure this can be made out of Lego.

The only major non-Lego parts in the Lego Watt balance are a few coils of wire wound around a PVC pipe and a few neodymium magnets. These are placed on both arms of the balance, and a pair of lasers are used to make sure both arms of the balance are level. Data are collected by measuring the coils through a few analog pins on a Labjack and a Phidget. Once the voltage and current induced in each coil is measured, the Wattage can be calculated, then the Planck constant, and finally how close the mass on the balance pan is to a real, idealized kilogram. Despite being made out of Lego, this system can measure a gram mass to 1% uncertainty.

The authors have included a list of Lego parts, most of which could be found in any giant tub of Lego in an 8-year-old’s closet. The only really expensive item on the BOM is a 16-bit USB DAQ; apart from that, it’s something anyone can build.