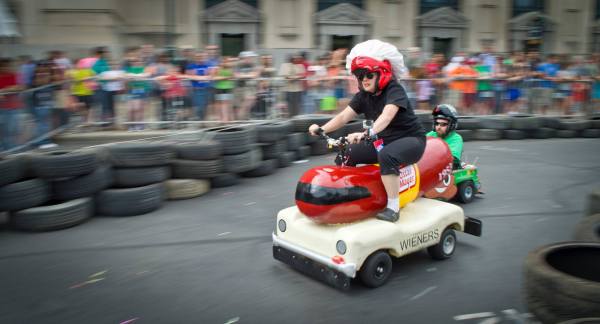 There are no shortage of fantastic and creative Power Racing Series cars, but here’s an especially fun example. [Pete Prodoehl] of Milwaukee Makerspace and his teammates [Kathy Cannistra] and [Kyle White] built a Power Racing car based on the design of the iconic Oscar Mayer Wienermobile.

They created the wienie and bun out of fiberglass and foam. Meanwhile, with the KC Maker Faire approaching, the team scrambled to finish the project, with [Kyle] working on assembly while [Pete] tackled the electronics. [Kyle] also proved to be the best wiener rider, with everyone else getting thrown off.

It should be noted that Milwaukee Makerspace got a Moxie bump because a wienermobile is on the PPPRS’s “hit list” of desirable designs. Anyone being the first to create a Top Gun F14, a Mystery Machine, or a non-DeLorean car from Back to the Future gets extra points.

If you like the Power Racing Series, you’ll be able to catch the wienermobile at both Maker Faire Detroit and Maker Faire Milwaukee. Also check out our posts on better racing with Power Wheels and checking a PPPRS car into baggage.

What did you do over the weekend? I spent both days at Maker Faire Kansas City and it was awesome. This is the fourth year the Faire has been held in Union Station, a stunning Kansas City landmark that celebrates its centennial this fall.

As you might imagine, there were 3D printers galore. One of my favorites was the One Up family from Q3D. These acrylic beauties start at $199 and offer a heated bed plate option.

SeeMeCNC had their Rostock Max V2 printer cooking up some huge prints, and Oni Technology, a local KC company, had their H Bot cranking.

At the Modio booth, my companion and I constructed heroes and monsters from a rainbow-colored pile of 3D-printed body parts and weapons. With Modio’s iPad app, you can create characters from the existing parts library, modify those parts, and print them on any 3D printer. All of the parts are designed to snap together. Modio recently teamed up with MakerBot and hopes to port their app from the iPad to the iPhone and Android in the near future.

I managed to resist the inexplicable Hostess booth and their free piles of Twinkies, Cup Cakes, and Coffee Cakes. They had a display that promised banana Twinkies and some Greek yogurt oddities, but only had the regular stuff on hand. On Sunday, I saw many people lugging around entire boxes of free Donettes and other goodies.