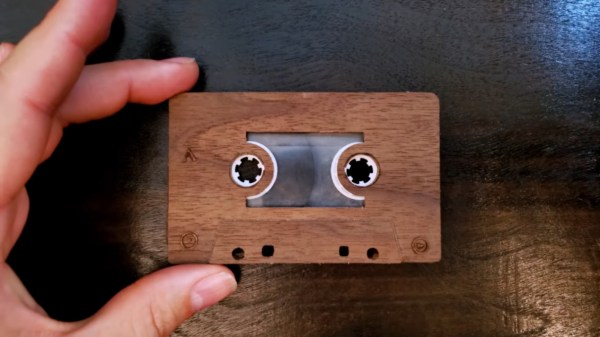 While the days of audio cassette tapes are long over for almost everyone, magnetic tape still enjoys extensive use in some other realms such as large-scale data backup. Those that are still using it to store their tunes are a special subset of audio enthusiasts. [Frank] still has a working tape deck, and enthusiasm for classic non-vinyl sound. His homage to audio tape? Building a working cassette made (almost) entirely of wood.

The cassette is modeled on the formerly popular Maxell XL-II and the first versions of this build were modeled in paper. Once the precise dimensions of the enclosure were determined, [Frank] got to work building the final version from wood in a decidedly 2D process. He used a plotter to cut layers out of a wood veneer and glued them together one-by-one. The impressive part of this build is that the tape reel bearings are also made from wood, using a small piece as a race that holds the reels without too much friction.

Once everything was pieced together and glued up, [Frank] had a perfect working cassette tape made entirely from wood with the exception of the magnetic tape and a few critical plastic parts that handle the tape directly. The build is an impressive piece of woodworking, not unlike the solid wood arcade cabinet from a few days ago.