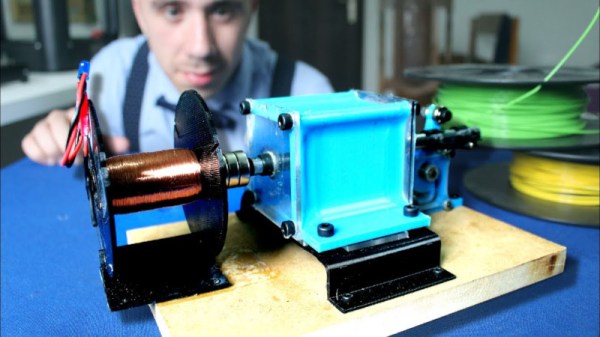 Before Tesla devised beautifully simple rotary machinery, he explored other methods of generating alternating current. One of those was the mechanical oscillator, and [Integza] had a go at replicating the device himself. (Video, embedded below the break.)

Initial attempts to reproduce the technology using 3D-printed parts were a failure. The round cylinder had issues sealing, and using O-ring seals introduced too much friction to allow the device to oscillate properly. A redesign that used external valving and a square cylinder proved more successful.

Once the oscillator was complete, the output shaft was fitted with magnets and a coil to generate electricity. After generating a disappointing 0.14 volts, [Integza] went back and had a look at the Maxwell-Faraday equations. Using this to guide the design, a new coil was produced with more turns, and the magnetic flux was maximised. With this done, the setup could generate seven volts, enough to light several LEDs.

While it’s not a particularly efficient generator, it’s a great proof-of-concept. Yes, Tesla’s invention worked, but it’s easy to see why he moved on to rotary designs when it came to real-world applications. We’ve seen [Integza] take on other builds too, like the ever-popular Tesla turbine.