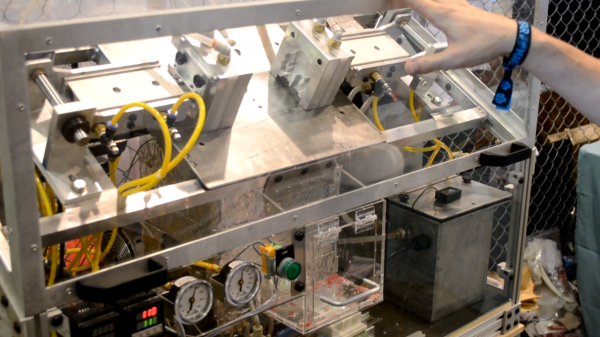 We caught up with [James Durand] at Maker Faire. He was one of the rare Makers (no mention of selling or future crowd funding) that had a booth at Maker Faire — he was exhibiting a blow molding machine that he built from scratch.

The fabrication process is 100% [James]. Every custom part was designed and milled by him. All of the assembly techniques were his to learn along the way. And we didn’t see anything that isn’t production ready. We’re both impressed and envious.

About three years ago he got the itch to build the mini-molder after learning about the Mold-A-Rama machine — a blow-molding vending machine that was popular a half century ago. A bit of his journey is documented as a molding category on his blog. For the most part it sounds like 1.5 years spent on the CAD design really paid off. He did share one element that required redesign. The initial prototype had a problem with the molds being pushed up when they came together. He tweaked the mechanism to close with a downward motion by flipping the hinge design. This seems to hold everything in place while the drinking fountain chiller and water pump cool the mold and the plastic model within.