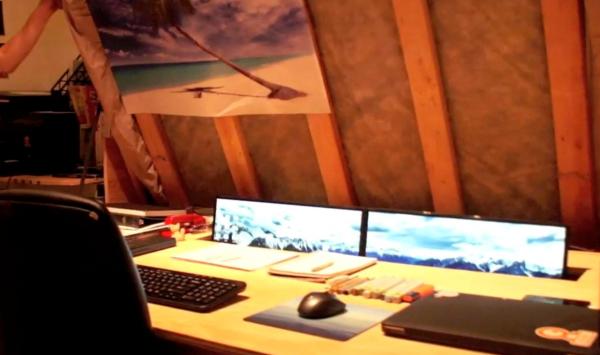 College dorms are notoriously tiny; which either forces most students into a life of minimalism, or for [Thomas Hopmans], innovation to overcome the lack of square-footage.

His first step was getting a Murphy bed, which saves tons of space. But he wanted to add a few extra features to his, so instead he decided to make his own! He designed the entire thing in SolidWorks, which might seem like overkill, but he’s an Industrial Design student, and has become quite proficient in the software from his various work internships.

The bed uses pneumatic struts to make lifting and lowering the bed frame easy — the cool part is the mechanism he designed which causes his dual 28″ monitors to pop up from the desk. They’re directly coupled to the bed with a linkage which ensures they’ll never get accidentally crushed by the bed.

He admits he could have just mounted the monitors to the bottom of the bed, but that wouldn’t have been nearly as fun as this.  He estimates the total cost was around $350 for whole thing, which isn’t half bad for a bed… and a desk!