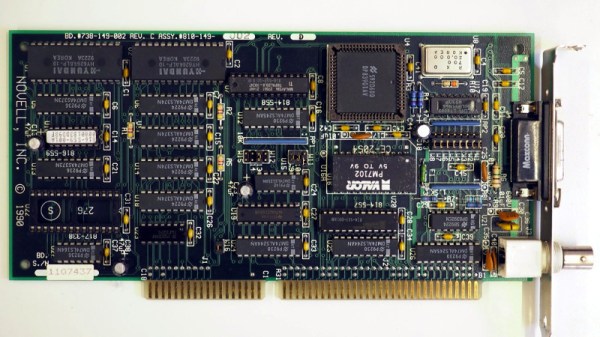 If you used almost any form of networked PC in the late 1980s or the 1990s, the chances are that you will at some point have encountered the Novell NE2000 network card. This 16-bit ISA card became a de facto standard for 16-bit network cards, such that very few “NE2000” cards were the real thing. A host of clones filled the market, some of which followed the spec of the original rather loosely. It’s something [Michal Necasek] examines as he takes the reader through the history of the NE2000 and why it gained something of a bad reputation. An interesting read for ’90s PC veterans who battled with dodgy Windows 3.1 network drivers.

The Novell line of network cards were not a primary product of the network server OS company but an attempt to spur the uptake of networked computers in an age when few machines were supplied from the factory with a network card installed. They were largely an implementation of the reference design for the National Semiconductor DP3890 Ethernet interface chipset, and for simplicity of interfacing and drivers they used an I/O mapped interface rather than DMA. The problem with the NE2000 wasn’t the card itself which would work with any NE2000 driver, but the host of “NE2000 compatible” cards that appeared over the decade as that magic phrase became a key selling point at the bottom end of the market. Sure they might contain a DP3890 or its clones, but even minor differences in behaviour would cause them not to work with all drivers, and thus they gained a bad name. The piece reveals the original card as one that might have been slow and outdated towards the end of its reign as a standard card, but maybe one not deserving of the ire directed at it.

If ancient networking kit is your thing, we’ve got some far more obscure stuff to show you.