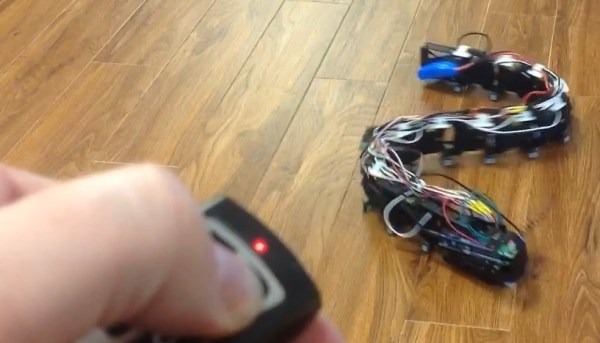 It makes sense considering evolution, but nature comes up with lots of different ways to do things. Consider moving. Land animals walk on four feet or two, some jump, and some use peristalsis or otherwise slither. Oddly, though, mother nature never developed the wheel (although the mother-of-pearl moth’s caterpillar will form its entire body into a hoop and roll away from attackers). Human-developed robots which, on the other hand, most often use wheels. Even a tank track has wheels within. [Joesinstructables] latest robot still uses wheels, but it emulates the slithering motion of a snake, He calls it the Lake Erie Mamba.

The most interesting thing about the robot is that it can reconfigure and move in several different modalities. Like the caterpillar, it can even form a wheel like an ouroboros and roll. You can see that at the end of the video, below.