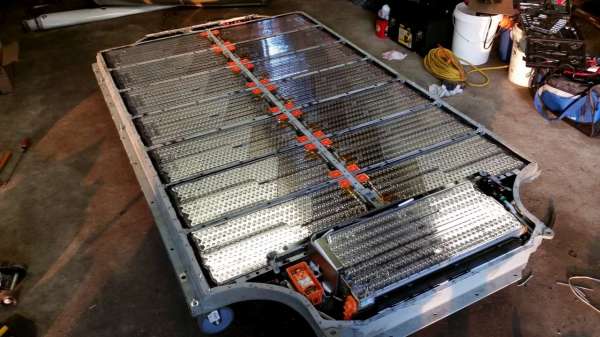 Tesla Motors club user [wk057], a Tesla model S owner himself, wants to build an awesome solar storage system. He’s purchased a battery pack from a salvaged Tesla Model S, and is tearing it down. Thankfully he’s posting pictures for everyone to follow along at home. The closest thing we’ve seen to this was [Charles] tearing into a Ford Fusion battery. While the Ford battery is NiMH, the Tesla is a completely different animal. Comprised of over 7000 individual lithium-ion cells in 16 modules, the Tesla battery pack packs a punch. It’s rated capacity is 85kWh at 400VDC.

[wk057] found each cell connected by a thin wire to the module buses. These wires act as cell level fuses, contributing to the overall safety of the pack. He also found the water cooling loops were still charged with coolant, under a bit of pressure. [wk057] scanned and uploaded high res images of the Tesla battery management system PCBs (large image link). It is a bit difficult to read the individual part numbers due the conformal coating on the boards.

A second forum link shows images of [wk057] pulling the modules out of the pack. To do this he had to chip away the pack’s spine, which consisted of a 2/0 gauge wire potted in some sort of RTV rubber compound.

We’re sure Tesla doesn’t support hackers using their packs to power houses. Ironically this is exactly the sort of thing Elon Musk is working on over at Solar City.