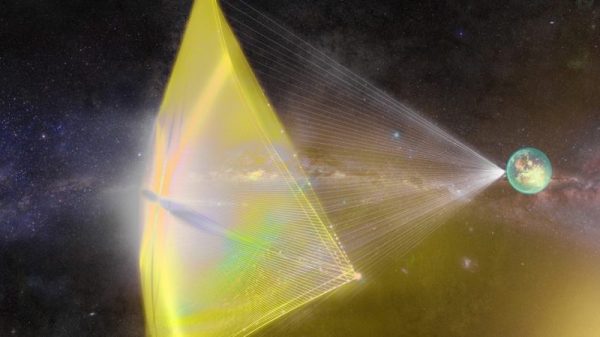 As a space-faring species, we’ve done a fair job of exploring and exploiting our local neighborhood. We’re pretty good at putting people and machines into orbit, but our galactic-scale signature is pretty tiny. Our radio signals are no more than 100 light-years away, and our farthest physical artifact isn’t even a light-day away from us 40 years after it launched.

Clearly we need to do a better job of getting out there, and that’s the goal of Breakthrough Initiatives’ Starshot program, which aims to launch a nano-spacecraft to Alpha Centauri and get it there fast. The program aims to build solar-powered credit card-sized spacecraft with sensors, cameras, communications, and even MEMS thrusters for attitude control. Motive power will come from solar sails catching laser light shined onto it from Earth, eventually accelerating the craft to 20% of the speed of light and reaching its destination within a generation.

The thought that we could start spreading ourselves out into the galaxy within the lifespan of most of the people on Earth is intoxicating. Sure, a wafer of silicon is a far cry from a sleek starship with powerful warp engines and all the finest appointments, or a gritty star freighter that can make the Kessel Run in less than 12 parsecs. But the laws of physics and the limits of engineering conspire to keep us mostly stuck at the bottom of a deep gravity well, and if this means sending fleets of nanobots across the galaxy in our stead, so be it.

And no matter what form our first galactic spacecraft take, you can bet that the Deep Space Network will be supporting the mission. For now, you can listen in on the program’s test satellites currently in orbit if you tune to 437.240 MHz.