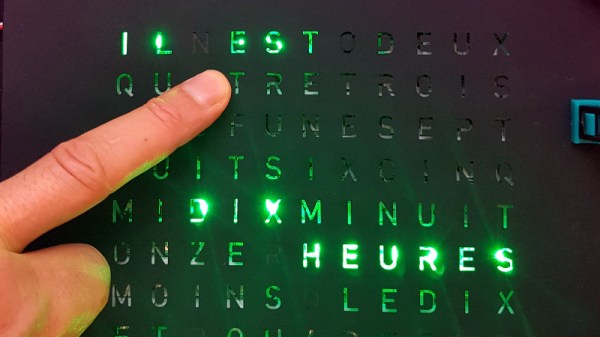 We’ve all had that moment of seeing a product that’s an object of desire, only to realize that it’s a little beyond our means. Many of us in this community resolve to build our own, indeed these pages are full of projects that began in this way. But few of us have the audacity of [vcch], who was so taken with the QLockTwo expensive designer word clock that they built their own using the facsimile of its face on the front of QLock’s own catalogue. The claim is that this isn’t an unauthorized copy as such because no clock has been copied — as far as we’re aware there’s nothing against taking the scissors to a piece of promotional literature, and it certainly differs from the usual word clocks we’ve seen.

So how has this masterpiece of knock-off engineering been performed? The catalog cover has a high-quality cut-out rendition of the clock face, and the pages behind are thick enough to conceal an addressable LED. By cutting slots through the pages enough space is created for strips of LEDs, which are then hooked up to a Wemos D1 that runs the show. The software is provided, et voila! A faithful facsimile of the original QLockTwo, in part produced by QLock themselves. We applaud the ingenuity involved, but like [vcch] we’d say that if you like the QLockTwo then perhaps you’d like to consider buying one.