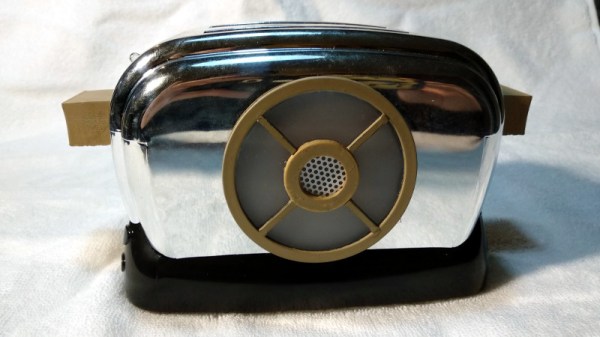 It’s cold outside, there’s no kind of atmosphere, you’re all alone, more or less. More or less meaning that you share the gigantic mining ship that is your home on the other side of the galaxy with an ineffectual android, a humanoid descended from your cat, a holographic representation of your dead colleague who’s a complete smeghead, and a really annoying sentient toaster that’s obsessed with bread products. If all this rings a bell, then maybe you’re familiar with the cult BBC TV series, Red Dwarf.  It’s a show that evidently [Bill Dudley] has spent too much time watching, because he’s created a really convincing replica of that talking toaster.

The base toaster is a toy appliance with a little clockwork ejector for toy toast, that comes with plenty of space inside and is easy to accessories for the classic Talkie Toaster look. Inside is an off-the-shelf MP3 player board and a home-made PCB which drives a set of LEDs behind the speaker grille in time with the audio. The result won’t make any toast, waffles, or even crumpets, but it will delight any Red Dwarf fans who might be passing, whether someone has smoked them a kipper or not.

Surprisingly this is not the first Talkie Toaster build we’ve seen. If they met, would they have a harmonious conversation about bagels?