Git is a handy tool that many of us are using for more than just software development. Having a cloud-based upstream repository is also surprisingly useful, but until now using GitHub — the most common upstream server — meant firing up a web browser, at least for certain tasks. Now GitHub is releasing a beta version of command-line tools made to manipulate your GitHub repos.

The tools are early release so they mostly focus on issues and pull requests. Of course, git itself will do the normal things like clone and checkout — you’ve always been able to do that on the command line. The example given in the announcement blog post lists all issues with a help wanted label:

We noticed that asking to view the issue, while done on the command line, will still open a browser. The tools are still a little early, so this is an excellent time to let the developers know what you’d like or otherwise influence the project.

We were a little surprised it wouldn’t just consume git, so that you’d use the same commands for everything and it would just pass pre-formed commands to git. Of course, that would be pretty easy to write as a shell script wrapper if you were interested in such a thing.

You’d be forgiven for only thinking of git as a way to manage source code revisions, but it’s actually capable of all sorts of interesting tricks.

Most of us know that to get the best possible WiFi signal, you want there to be as few walls as possible between you and the Access Point. But that might soon change, as researchers at MIT have found a way to make surfaces increase signal strength. Called RFocus, the technique uses a wall panel covered in simple antennas to dynamically focus or reflect RF energy towards a intended receiver.

The normal methods to increase wireless range usually involve increasing the transmitter output or adding larger, more efficient, or directional antennas to the receivers and transmitters. But these techniques are limited when you need to the reduce power consumption and size of the devices. The MIT teams approached the problem from a completely different angle, by optimizing the environment.

The wall panel in question consist of 94 PCBs, each containing 40 passive antenna elements in the form of copper rectangles. Each element is a quarter wavelength long (125 mm for 2.4 Ghz), and on its own it doesn’t have any real effect on the signals, allowing it to pass through the panel. Between the ends of elements are small RF switches, that can close to combine two antenna elements into single half wavelength antenna, creating a reflector. When this is applied across the panel in different patterns it can effectively beamform the signal to focus it at different points in space.

The RF switches are connected to shift registers, which are all controlled via a single SPI bus with an Arduino. Each RF switch is activated in a pseudo-random sequence, changing the configuration of the panel 10,000 times in 100 ms. The signal strength at the receiver is reported to the panel controller for each configuration, allowing the controller to select the best configuration for any single transmitter. In a scenario where multiple low-power sensor nodes are deployed, this can allow the receiver to “focus” on each node in turn. The full paper is a very interesting read, downloadable as a PDF.

RF is generally considered the black magic of electronics, but it can all become a bit clearer with a basic knowledge of antenna theory and modulation schemes.

Thanks to [Qes] for the tip! 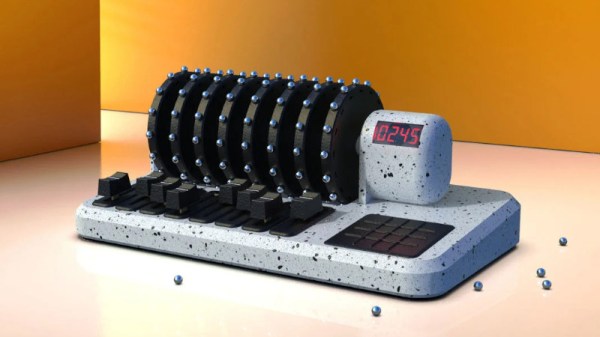 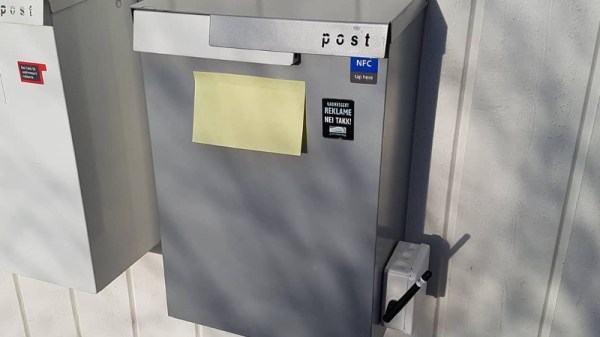 As more of the world’s communication moves into the electronic realm, a casualty has come in the physical mail. Where once each new day might have brought with it a bulging mailbox, today it’s not uncommon for days to pass with not even so much as a bill or a coupon book. For [Eivholt] this presents a problem: he doesn’t want to miss a parcel but most visits to the mailbox are futile. His solution is a LoRa-connected mailbox monitor that sips power from a pair of AAA batteries to the extent that so far it’s run for over two years on a single set.

At its heart is a single board, a Talk2 Whisper Node. This packs a low-power version of the ATmega328 microcontroller alongside a LoRa radio and an efficient power regulator allowing it to draw only 8.70 uA in standby mode, waking up only for extremely short periods to check for mail and report via LoRa to The Things Network. The sensor is simply a microswitch, selected after finding a reed switch problematic to install. Finally an SDR was used to debug the operation of the radio.

The write-up also provides an introduction to extreme low power projects, including some tips on measuring such tiny currents. Even if you have no interest in a mailbox, any tricks that can help maximize power efficiency are always worth taking a look at. Check out the video after the break to see this radio-equipped mailbox in action.

END_OF_DOCUMENT_TOKEN_TO_BE_REPLACED 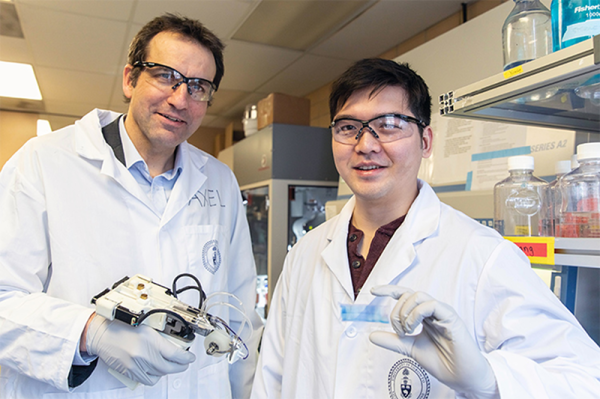 In space — at least on Star Trek — no one can hear you apply a band-aid. That’s too low tech. When a Star Fleet officer gets an ouchie, the real or holographic doctor waves a dermal regenerator over the afflicted area, and new skin magically appears. Science fiction, huh? Maybe not. A group of scientists from Canada recently published a paper on a handheld instrument for depositing “skin precursor sheets” over full-thickness burns. The paper is behind a paywall and if you don’t know how to get it or don’t want to get it, you can see a video from the University of Toronto, below.

Although they use the term 3D printing, the device is more like a paint roller. Several substances merge together in the print head and lay down on the burn in broad stripes.

END_OF_DOCUMENT_TOKEN_TO_BE_REPLACED 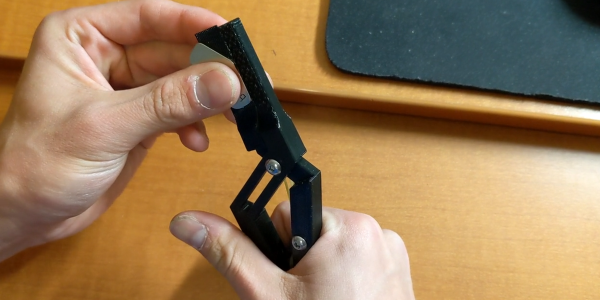 Neodymium magnets are fun to play with, largely thanks to their incredibly strong magnetic field. This also gives them plenty of applications where other magnets won’t cut the mustard. This very strength is also a drawback, making them difficult to work with and posing a danger to squishy human bodies. To help ease the task, [RandomCitizen4] developed a handy magnet separator tool.

The tool is similar in design to a pair of scissors, with two blades that are slid together when the handles are squeezed. The design is subtly different, however, with plastic blades that slide in between the gaps of a pair of magnets stuck together, pushing them apart. With just three parts to be 3D printed, a handful of fasteners and a rubber band, the tool is easy to build, too.

As someone who has spent significant time sliding magnets apart on the edge of a desk, wearing away the skin on my hands in the process, this tool would certainly come in handy. It might also be useful if you find yourself experimenting with magswitches or similar. Video after the break.

END_OF_DOCUMENT_TOKEN_TO_BE_REPLACED 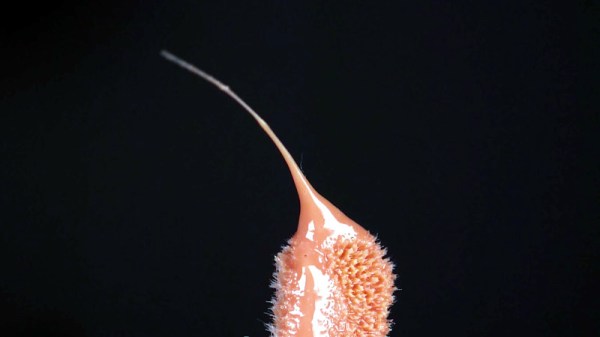 There probably comes a point in every female technical journalist’s career at which she covers her first make-up story and wonders aloud whether this is what her life has come to. But this make-up story involves some physics, and follows a series of viral videos in the TikTok community in which specialist cosmetics vloggers were surprised to see lip gloss apparently levitating — defying gravity — from the ends of its applicators. This caught the attention of [Steve Mould], who followed up on his hunch that static electricity might be responsible. What follows in the video below the break are a variety of attempts to recreate and characterise the phenomenon.

The tried-and-trusted approach of rubbing feet on the carpet failing to cause any movement in the damp atmosphere of a British January, he’s off to try a Van de Graaff generator Even the hefty electrostatic charge from that failed to produce more than a tiny blip, but did at least give a suggestion that the effect might be electrostatic.

Finally he was able to replicate the beauty vloggers’ results using the FunFlyStick electrostatic toy, with satisfying threads of lip gloss heading off into the air. The FunFlyStick is an interesting device in its own right, being a Van de Graaff generator in toy form and capable of generating significant quantities of charge. The flying lip gloss is an interesting phenomenon, but speaks further about just how much electrostatic charge can accumulate on mundane objects in a dry climate. Those of in damper climes would do well to take note before we travel.