[Vije Miller]’s Arduino Licorice Launcher is based on the simple and logical premise that one must always have a voice-activated Red Vines catapult in the workshop. When he calls out to the robot, it turns to aim at him and flings a piece of licorice at his head.

The chassis is CNCed out of quarter-inch MDF and the spring-loaded catapult arm is managed by two servos, one to tension the arm and one to secure it until it’s triggered.  Third and fourth servos aim the catapult and dispense another piece of licorice from the magazine. His robot adapts a radio homing technique [Vije] learned about from RoboWarner, which allows a robot to track a moving RF signal.

[Vije]’s first prototype uses an Arduino Uno connected to a serial port on a PC, but he hopes to acquire an MKR1000 WiFi module, which combines a Arduino Zero with WiFi. Already, this Red Vines launcher is a complete success; the marketing team at Red Vines sent him a huge pile of swag and free licorice for his efforts. You can check out [Vije]’s promo video of the project below.

END_OF_DOCUMENT_TOKEN_TO_BE_REPLACED 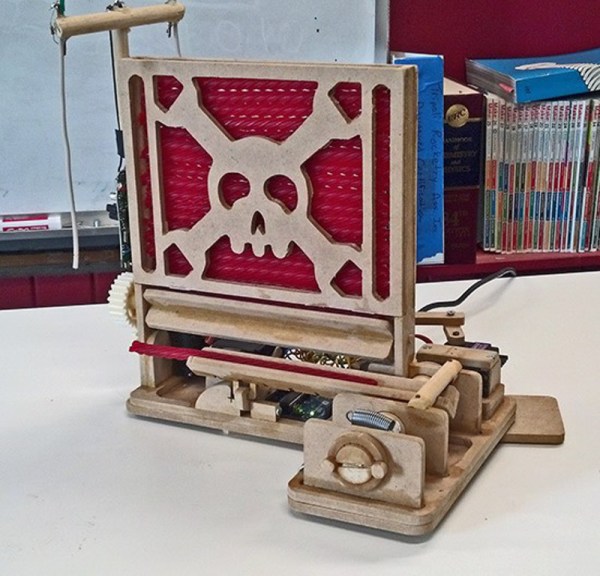 Hacking and snacking often go hand in hand. They go together even better if you have a robot that can throw a tasty treat to you on command. That’s the dream behind this candy catapult. We’ve featured quite a few of [TVMiller]’s projects in the past, so we know he spends a lot of time hacking. So, how does this licorice launcher work to him keep going?