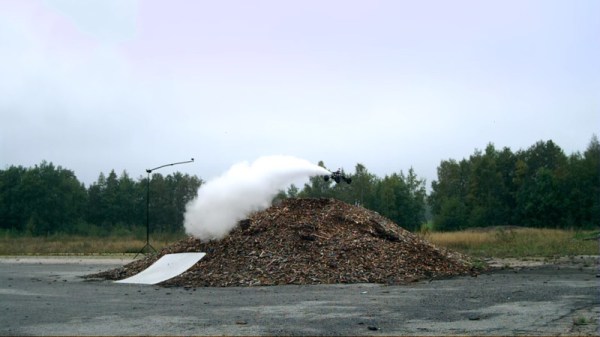 If you tuned into the first ever episode of Mythbusters way back when, you’ll remember a certain rocket-powered Chevy Impala. [David Windestal] decided to recreate this – at 1:10 scale.

The car in question is a Hobbyking Desert Fox RC car – normally a four-wheel drive truck which ships ready-to-run, making it a great way to get a project started quickly. Rocket power is provided by the same type of motor used in the Swedish Rocket Knives we’ve covered previously.

Initial testing proves unsuccessful – the car simply tumbles out of control when the rocket is fired. It takes a beating, losing a wheel in the process. Following on from this, a decision is made to cook up a slower burning rocket motor and switch to an asphalt surface for testing. This is much more succesful and the car begins to see some properly high speeds, nearly peeling the tyres off the rim in the process!

It’s a fun concept that could likely be replicated with off-the-shelf rocket motors, too. Throw us your ideas for better rocket powered transports in the comments below.

[Thanks to Heinrich for the tip!]
END_OF_DOCUMENT_TOKEN_TO_BE_REPLACED