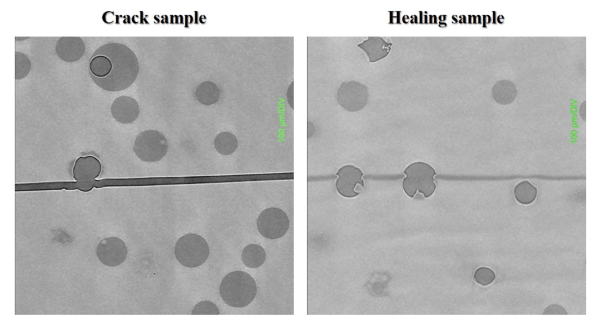 The Korea Institute of Science and Technology (KIST) have announced a transparent, self-healing polyimide material designed for smart phone screens. A KIST team from the Composite Materials Applications Research Center led by Dr Yong-chae Jung and a team at Yonsei University’s Electronics Materials Lab led by Dr Hak-soo Han collaborated on this project. While the goal was to improve the material used in folding smart phone screens, the results seem applicable to all glass screens that are prone to cracks and scratches.

This new material can heal itself in 12 hours at room temperature, even faster under UV light. As we understand it, many micro-balloons of flaxseed oil are impregnated on the surface and break open if the material is damaged. Thus liberated, the oil is now free to flow into and fill up the cracks. We imagine it’s like repairing windshield cracks, but on a much smaller scale.

The idea is to eliminate the need for user-added screen protection films and increase the life of your phone screen. But cynical people might wonder if smart phone manufacturers will embrace this new technology with much enthusiasm — after all, if people use their phones longer it might cut into sales. Those with access to academic journals can read the report here. 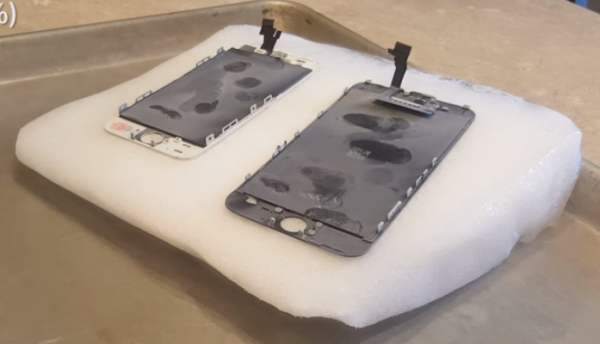 Smartphones are the opium of the people. If you need proof, just watch the average person’s reaction when they break “their precious”. Repairing smartphones has become a huge business. The most often broken item on phones is of course the front glass. In most cases, the screen itself doesn’t break. On newer smartphones, even the touchscreen is safe. The front glass is only a protective lens.

The easiest way to repair a broken front glass is to swap the entire LCD assembly. For an iPhone 6 plus, this will run upwards of $120 USD. However, the glass lens alone is just $10. The problem is that the LCD, digitizer and front glass are a laminated package. Removing them without breaking the wafer thin LCD glass requires great care. The hardest part is breaking down the optical glue securing the glass to the LCD. In the past that has been done with heat. More recently, companies from China have been selling liquid-nitrogen-based machines that cool the assembly. Now immersing a phone screen in -196° C liquid nitrogen would probably destroy the LCD. However, these machines use a temperature controller to keep a surface at -140° C. Just enough to cause the glue to become brittle, but not kill the LCD.

[JerryRigEverything] doesn’t have several thousand dollars for a liquid nitrogen machine, but he does have a $5 block of dry ice. Dry ice runs at -78.5°C. Balmy compared to liquid nitrogen, but still plenty cold. After laying the phone screens down on the ice for a few minutes, [Jerry] was able to chip away the glass. It definitely takes more work than the nitrogen method. Still, if you’re not opening your own phone repair shop, we think this is the way to go.

Broken phones are a cheap and easy way to get high-resolution LCD screens for your projects. The problem is driving them. [Twl] has an awesome project on Hackaday.io for driving phone screens using an FPGA. We haven’t seen it done with iPhone 6 yet though. Anyone up for the challenge?