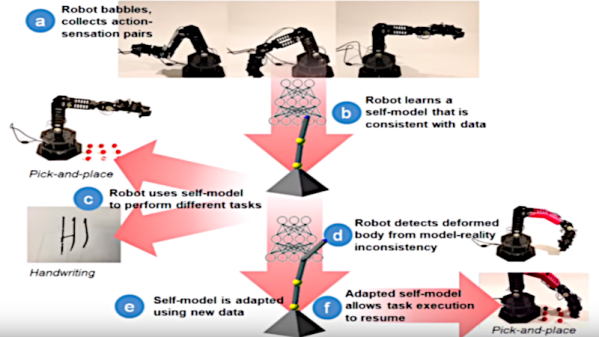 If you ever tried to program a robotic arm or almost any robotic mechanism that has more than 3 degrees of freedom, you know that a big part of the programming goes to the programming of the movements themselves. What if you built a robot, regardless of how you connect the motors and joints and, with no knowledge of itself, the robot becomes aware of the way it is physically built?

That is what Columbia Engineering researchers have made by creating a robot arm that learns how it is connected, with zero prior knowledge of physics, geometry, or motor dynamics. At first, the robot has no idea what its shape is, how its motors work and how they affect its movement. After one day of trying out its own outputs in a pretty much random fashion and getting feedback of its actions, the robot creates an accurate internal self-simulation of itself using deep-learning techniques.

The robotic arm used in this study by Lipson and his PhD student Robert Kwiatkowski is a four-degree-of-freedom articulated robotic arm. The first self-models were inaccurate as the robot did not know how its joints were connected. After about 35 hours of training, the self-model became consistent with the physical robot to within four centimeters. The self-model then performed a pick-and-place task that enabled the robot to recalibrate its original position between each step along the trajectory based entirely on the internal self-model.

To test whether the self-model could detect damage to itself, the researchers 3D-printed a deformed part to simulate damage and the robot was able to detect the change and re-train its self-model. The new self-model enabled the robot to resume its pick-and-place tasks with little loss of performance.

Since the internal representation is not static, not only this helps the robot to improve its performance over time but also allows it to adapt to damage and changes in its own structure. This could help robots to continue to function more reliably when there its part start to wear off or, for example, when replacement parts are not exactly the same format or shape.

Of course, it will be long before this arm can get a precision anywhere near Dexter, the 2018 Hackaday Prize winner, but it is still pretty cool to see the video of this research: