Dexter isn’t the only robotic arm in town, by any means. But in terms of hobbyist-level robotics, it’s by far the most complete robot arm that we’ve seen, and it includes a couple of design features that make both its positional accuracy and overall usability stand out above the rest. This is a robot arm with many of the bells and whistles of a hundred-thousand dollar robot, but on a couple-thousand dollar budget. 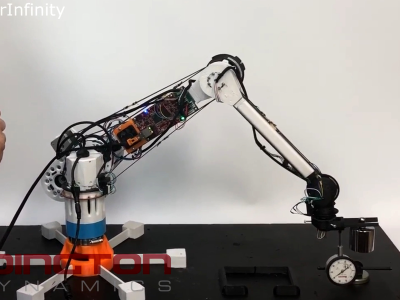 Moreover, many of the design innovations can be taken piecemeal and used in your own project. For instance, our judges particularly liked Dexter’s clever encoder design. Optical encoders usually use a disk with holes in it; shine a light through the disk onto a sensor and you can determine the position by counting the number of resulting pulses.

Dexter takes this a step further, using the analog value of the light sensor, allowing it to track a few thousand positions per hole, multiplying the usable resolution. This means that, with a 3D printed encoder wheel and some serious math to transform this into a position, Dexter’s encoder can resolve over a million positions per revolution. That’s mind-blowing precision, and it’s available relatively cheaply due to advances in computing power.

Specifically, an FPGA and some custom “gateware” logic code runs the conversion of encoder data to arm position. That’s right, they’re dedicating an embedded Linux computer with FPGA peripherals doing the heavy lifting to calculate two joints’ position. You might think that this is overkill, but with an arm like this any small angular error in the first joint that sits on the table is multiplied by the reach of the arm. You want positional accuracy of 0.1 mm at the end of a half-meter arm, you’re looking at 0.01 degree angular resolution. Getting that resolution with a 3D-printed encoder wheel and some heavy computation is a great innovation. 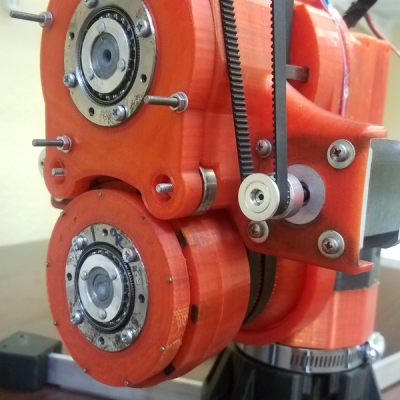 Combine such detailed positional feedback with some good software and you can design an arm that’s both compliant, strong, and easily trainable just by moving it around. Dexter uses harmonic drives for some of the axes, and while you don’t normally want to force a harmonic drive, the extreme resolution of the positional sensor lets the robot know when it’s being pushed out of position and either apply more force to hold position, or drive the motors in the direction of the motion if it’s trying to learn a new move. This makes for easy training, much in the style of Baxter, the robot that has obviously inspired Dexter, but costs significantly more and isn’t open source.

At the pointy end of the stick, Dexter has an expandable set of end effectors connected by a simple 3D-printed locking-collar-and-pogo-pin arrangement. Whether you need a vacuum, scissors, or a gripper at the end of your robot arm, Dexter has you covered.

If there’s one flaw in Dexter, it’s that the FPGA code to run the encoders was written in a proprietary hardware description language, Viva. So while the Dexter folks can provide us with a bitstream to flash into our own FPGAs, we can’t tweak the encoders’ algorithms. That’s a shame, but Haddington Dynamics’ position is that they can’t afford to re-engineer the FPGA code in order to become fully open source.

In the end, though, Dexter is significantly more than the sum of its parts. Haddington Dynamics has applied what our judge Quinn Dunki called “true hacker spirit” to making the build more affordable wherever possible, but still retaining high quality. If you’re at all interested in building a robot arm, there are a ton of lessons to learn here, and if you need a high-class solution on a hacker’s budget, this is where we’d start. We can’t wait to see what’s been updated in the newest version!

25 thoughts on “An In-Depth Look At Dexter, The Robotic Arm”