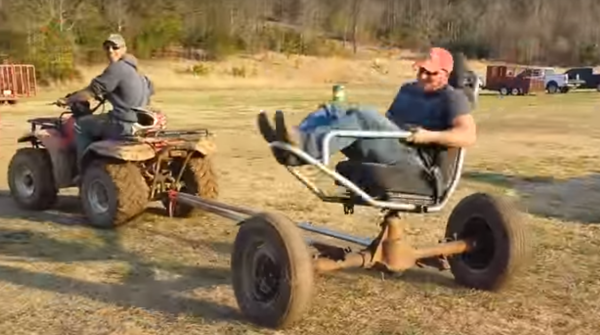 Humans seem to have a strange love affair with testing their limits, especially when it comes to spinning. Perhaps they ride the Gravitron while dreaming they’re in NASA’s 20 g test centrifuge. When carnival rides aren’t enough though, a few intrepid hackers bust out the welders and take matters into their own hands. This is a hack that goes by many names, though  “The Redneck Spin Chair” will bring up plenty of hits on YouTube.

The design is dead simple. Take a rear differential and axle assembly out of an old car or truck. Rotate it 90 degrees, so the diff is now pointing up. Weld a chair on. Finally, weld on a couple of tow bars. Pulling the whole mess will cause the wheels to spin, which transmits power through the differential and rotates the chair. The ride doesn’t have be pulled very fast, as automotive differentials generally have reduction between 3:1 and 5:1. We’re running things in reverse, so that reduction becomes a multiplier. The result, which can be seen in the video below is a very dizzy rider.

The earliest incarnation of this ride we could find was created at Eagle Mountain in Burtrum, Minnesota. We’re betting this particular hack has been around for decades longer though. The closest in our recent memory is North Street Labs’ Centrifury. Do you know of an earlier incarnation? Let us know in the comments!