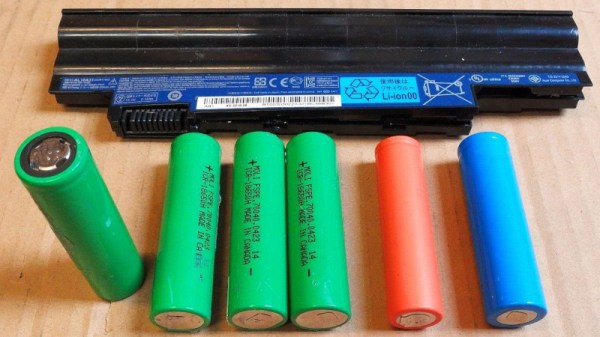 The 18650 cell has become a ubiquitous standard in the lithium battery world. From power drills to early Tesla vehicles, these compact cells power all manner of portable devices. A particularly common use is in laptop batteries, where they’re often built into a pack using the Smart Battery System. This creates a smart battery that can communicate and report on its own status. PackProbe is a software tool built to communicate with these batteries, and you might just find it comes in handy.

The code runs on the WiFi-enabled Arduino Yún by default, but can be easily modified to suit other Arduino platforms. Communicating over SMBus using the Arduino’s I2C hardware, it’s capable of working with the vast majority of laptop batteries out there which comply with the Smart Battery System. With that standard being minted in 1994, it’s spread far and wide these days.

It’s a great way to harvest not only the specifications and manufacturing details of your laptop battery pack, but also to check on the health of the battery. This can give a clear idea over whether the battery is still usable, as well as whether the cells are worth harvesting for those in the recycling business.

You’re not limited to just the Arduino, though. There’s a similar tool available for the ESP8266, too.