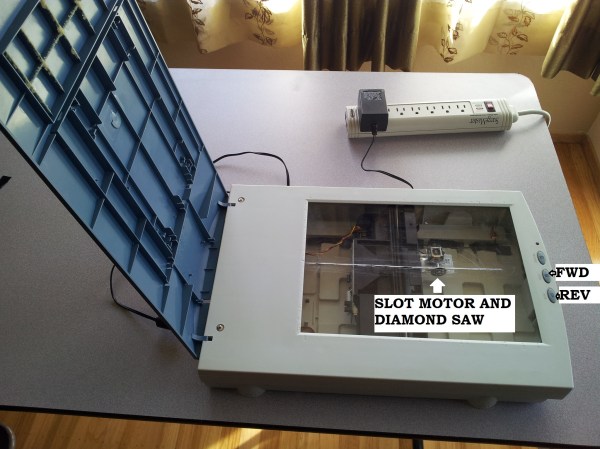 [sudarshan] is a solar hobbyist and needed a way to cut solar cells for his projects. He had previously created a rotary tool saw but manually feeding them through was sketchy at best. With just a slight wrong movement of his hand or flex in the work surface would cause the cell to break. These cells are extremely brittle and break easily. He needed a method of cutting these cells that was free from jitters and would cut in a straight line. He looked around his junk bin and found an odd solution… a scanner. Yes, the type you would scan photos in your computer with. The scanner had two critically important features, a flat surface and a carriage mechanism that moves perfectly parallel with that flat surface.

[sudarshan] made a solar cell cutting mini table saw with that scanner and made the cutting happen automatically. He mounted a motor with a diamond saw disk to the carriage, that is responsible for the cutting. The blade was positioned just high enough to poke through the plexiglass that replaced the original glass bed. A power switch turns on the cutting disk motor and an Arduino was used to move the carriage, including the cutting blade, back and forth. Two of the stock scanner buttons were reused and wired to the Arduino to keep the saw looking good.

END_OF_DOCUMENT_TOKEN_TO_BE_REPLACED We spotted [Kerrin Mansfield]’s lovely solar engine on ladyada’s rantings. It uses 16 1/8th inch solar cells to collect power. At night, an orange LED pulses at .2Hz. He doesn’t have a specific write up on the construction, but from the component layout, it looks identical to [Gareth Branwyn]’s schematic in Make 08, which you can find in the PDF.