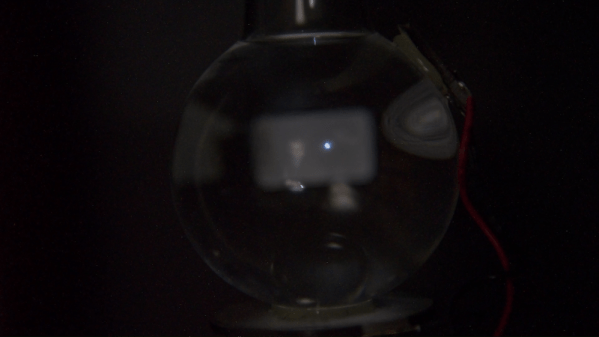 If nothing else, [Justin Atkin] is persistent. How else do you explain a five-year quest to create sonoluminescence with simple tools?

So what exactly is sonoluminescence? The short answer is as the name suggests: a release of light caused by sound. In [Justin]’s case, he used an ultrasonic transducer to set up a standing wave at the resonant frequency of a flask of water. A drop of water is used to entrain a small air bubble, which is held in a stable position in the flask in much the same way as styrofoam beads are in an acoustic levitator. Turn off the lights and you’ll see that the bubble glows with a ghostly blue light.

What causes the glow? Good question. According to [Justin], we just don’t know for sure what causes it, although the leading theory is that cavitation of the bubble causes the trapped gas to compress and heat violently, turning into a brief bit of plasma. But there are problems with that theory, which is one of the reasons he wanted to show just how easy the process can be – now that he’s shaken out the bugs with five years of effort. It wasn’t easy getting the transducers attached and the driver circuit properly tuned, but with little more than a signal generator, an audio amp, and a spool of magnet wire, you too can make your own “star in a jar.”

We applaud [Justin]’s determination to bring this project to a successful conclusion. It’s not unlike his dogged effort to make a cold plasma torch, or even his desktop radio telescope.