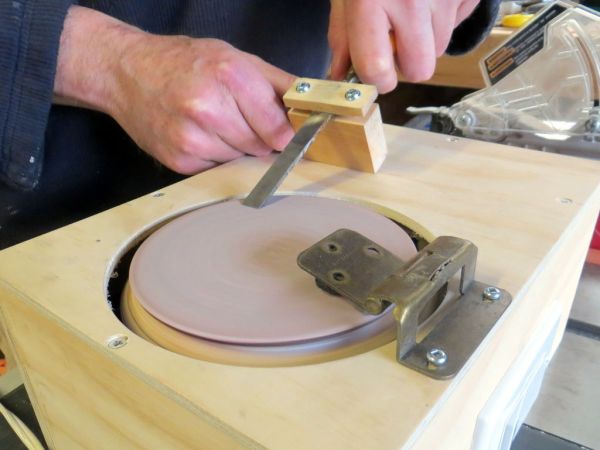 Poor [makendo] had seven broken bread makers lying around, all with failed paddle drivers. Since they also all have big motors and other useful parts in them, he decided to turn one of them into a powered tool-sharpening turntable.

First, [makendo]  salvaged the motor, the gear, and the thick circular glass window from one of the bread makers. He cut a platter from plywood the size of the glass window, chamfering the edge to fit the gear. Next, he built a housing from scrap plywood, separating the motor from the platter with a crosspiece to keep the motor free from dust. A large magnet on a hinge collects metal powder from the system quite effectively. The sharpener spins at about 200RPM: fast enough to do the job and slow enough not to get hot.

According to [makendo], the sharpener restores bevels nicely but doesn’t make edges”scary sharp”. To that end, he used a toaster oven door as a base for a series of micro-abrasive grits of sandpaper as a finishing rig. In order to sharpen his chisels uniformly, he made a jig to hold them firmly in place against either the powered turntable or the fine sandpapers.

[Thanks for the tip, Scott]