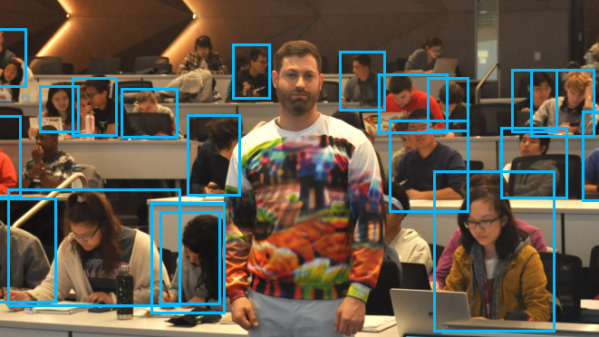 Ugly sweater season is rapidly approaching, at least here in the Northern Hemisphere. We’ve always been a bit baffled by the tradition of paying top dollar for a loud, obnoxious sweater that gets worn to exactly one social event a year. We don’t judge, of course, but that’s not to say we wouldn’t look a little more favorably on someone’s fashion choice if it were more like this AI-defeating adversarial ugly sweater.

The idea behind this research from the University of Maryland is not, of course, to inform fashion trends, nor is it to create a practical invisibility cloak. It’s really to probe machine learning systems for vulnerabilities by making small changes to the input while watching for changes in the output. In this case, the ML system was a YOLO-based vision system which has little trouble finding humans in an arbitrary image. The adversarial pattern was generated by using a large set of training images, some of which contain the objects of interest — in this case, humans. Each time a human is detected, a random pattern is rendered over the image, and the data is reassessed to see how much the pattern lowers the object’s score. The adversarial pattern eventually improves to the point where it mostly prevents humans from being recognized. Much more detail is available in the research paper (PDF) if you want to dig into the guts of this.

The pattern, which looks a little like a bad impressionist painting of people buying pumpkins at a market and bears some resemblance to one we’ve seen before in similar work, is said to work better from different viewing angles. It also makes a spiffy pullover, especially if you’d rather blend in at that Christmas party.