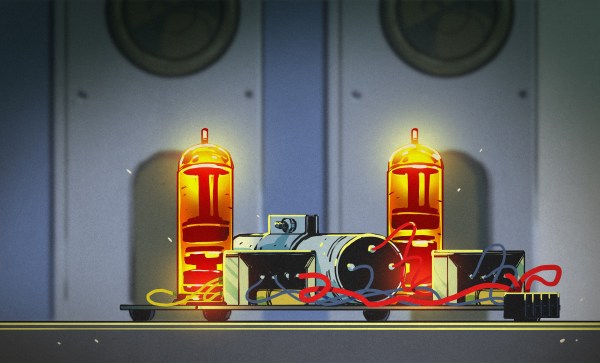 It must have been some time in the winter of 1991/92, and being immersed in student radio and sound-and-light I was party to an intense hi-fi arms race among the similarly afflicted. Some of my friends had rich parents or jobs on the side and could thus afford shiny amplifiers and the like, but I had neither of those and an elderly Mini to support. My only option therefore was to get creative and build my own. And since the ultimate object of audio desire a quarter century ago was a valve (tube) amp, that was what I decided to tackle.

Nowadays, building a valve amp is a surprisingly straightforward process, as there are many online suppliers who will sell you a kit of parts from the other side of the world. Transformer manufacturers produce readily available products for your HT supply and your audio output matching, so to a certain extent your choice of amp is simply a case of picking your preferred circuit and assembling it. Back then however the world of electronics had extricated itself from the world of valves a couple of decades earlier, so getting your hands on the components was something of a challenge. I cut out the power supply by using a scrap Dymar Electronics instrument enclosure which had built-in HT and heater rails ready to go, but the choice of transformers and high-voltage capacitors was something of a challenge.

Pulling the amplifier out of storage in 2017, I’m going in blind. I remember roughly what I did, but the details have been obscured by decades of other concerns. So in an odd meeting with my barely-adult self, it’s time to take a look at what I made. Where did I get it right, and just how badly did I get it wrong?