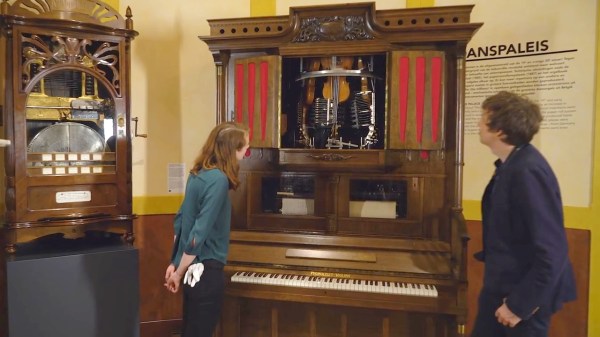 [Martin], of the YouTube channel [WinterGatan], recently uploaded a video tour of the Phonoliszt Violina, an orchestrion, or a machine that plays music that sounds as though an orchestra is playing. The interesting thing about this one is that it plays the violin. At the time of its construction, people weren’t even certain such a thing would be possible and so when [Ludwig Hupfeld] first built one around 1910, it was considered the eighth wonder of the world.

The particular one shown in the video is at the Speelklok Museum in Utrecht, the Netherlands. The bow is a rotating cylinder with 1300 horsehairs. To get the sound of a single violin, it actually uses three of them. Rather than the bow being moved to press against the strings, the violins tilt forward to make their strings contact the rotating bow. Only one string is used per violin, hence the reason that three violins are needed. The volume is controlled by making the bow rotate faster for more volume, and slower for less. Mechanical fingers press against the strings with cork to more closely imitate the human fingertip.

The machine consists of both the mechanical violin and piano under the guidance of two paper rolls, with one roll playing at a time. See and hear it in action in the video below.

END_OF_DOCUMENT_TOKEN_TO_BE_REPLACED

[Bithead942]’s ten-year-old niece is a huge Star Wars fan, and also a violinist. Which of course has led her to learn to play some of the music from the film franchise, and then to ask her uncle to make her violin bow light up like a lightsaber.

His solution might seem fairly straightforward at first sight, simply attach a strip of DotStar addressable LEDs to a bow and drive them from an Arduino Pro Mini to gain the required animation of a saber power-up. But of course, there’s another dimension to this project. Not only does the bow have to do its lightsaber trick, it also has to be a playable bow. The electronics must not impede the musician by being too heavy or intrusive, but the result must have enough power in reserve to keep the lights burning for the duration of a performance.

After experimentation with AAA cells and CR2032s the power requirement was satisfied by a tiny Li-po cell attached to the top of the end of the bow with industrial Velcro, and the LED strip was glued and further secured using tiny rubber bands of the type used by orthodontists.

A short demonstration of the bow’s lightsaber action is shown below the break, we’re sure it’ll impress the young violinist’s audience.