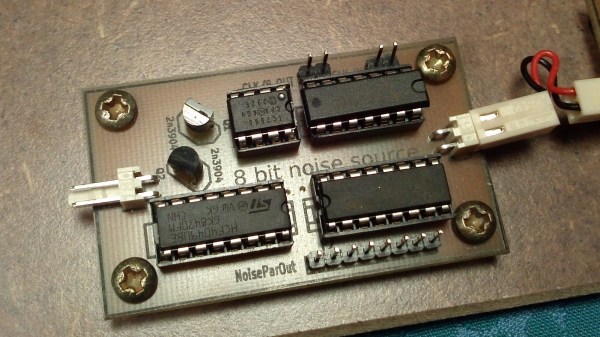 A random noise generator is pretty handy when working with music, and building one using a micro-controller can be pretty trivial. So it’s nice when someone comes along and builds it from a few analog and digital parts. [acidbourbon] built his Clocked 8-BIT Random Pattern Generator for  CMOS Synth  inspired and motivated by the recent article Logic Noise: Sweet, Sweet Oscillator Sounds by [Elliot Williams]. It’s 8-bit output can be used as a random sequencer for DIY CMOS synths.
This pattern generator is suited to to be used in combination with a 4051 8-channel analog multiplexer. But it sounds quite interesting on it’s own (best enjoyed in stereo, check out the video after the break). After building some CMOS synth circuits, [acidbourbon] moved on to make some sequencers and multiplexers which then let him to devise this random pattern generator which could be gated using a clock signal.

The basic principle is straight forward – generate noise, amplify it, apply a clock to get the gated noise output. His design choices for the various sections are well explained, based on constraints that he had to work with. Everything needs to work at 5V, but his noise generator circuit requires 12V to work. He choose to use a charge pump to generate -5V, resulting in a 10V supply, which was barely enough, but worked. A boost regulator might probably have served better to generate 12V, but maybe he already had the ICL7660 charge pump IC lying around in his parts bin. The rest of the circuit uses standard CMOS/TTL devices, and [acidbourbon] provides all of the design files for what looks like a neat, single sided PCB that can easily be made using the toner-transfer method.

END_OF_DOCUMENT_TOKEN_TO_BE_REPLACED