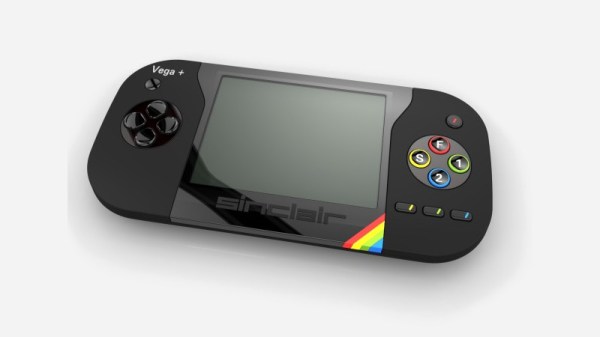 It has been an exciting time to be a retro computer enthusiast in recent years, and the availability of affordable single board computers, systems-on-chip, and FPGAs have meant that retro hardware could be accurately reproduced or emulated. A host of classic micros have been reborn, to delight both the veterans who had the originals, and a new crop of devotees.

Today we have news of the impending demise of one of the higher-profile projects. The ZX Vega+ is a handheld Sinclair Spectrum console bearing the Sinclair name that came with an impeccable pedigree in that it had the support of the man himself. It seemed like a good proposition on the crowdfunding site Indiegogo, and when it made its debut there in early 2016 it attracted over half a million pounds worth of backing in short order. Things soon went sour though, with reports of a falling-out within Retro Computers, followed by multiple missed deadlines and promises undelivered over the last couple of years. With little sign of either the money or the console itself, it seems Indiegogo have now lost patience and will be sending in the debt collectors to recover what they can. Whether the backers will see any of their money is unclear.

It’s fair to say that the ZX Vega saga has been a tortuous and rather sordid one, out of which few players emerge smelling of roses. In a way though it is entirely in keeping with the spirit of the 8-bit era, as the period from the late 1970s onwards was littered with the financially bare corpses of dubiously run companies in the home computer industry. Meanwhile if you are hankering for a Vega it should be easy enough to create one for yourself, as Retro Computers Ltd admitted that under its skin was a copy of the FUSE software emulator. We suspect that most Hackaday readers could take a Raspberry Pi and a suitable LCD, pair them with a 3D-printed case and an 18650 cell, and be playing Manic Miner in no time. Far simpler than this convoluted Spectrum project!