Frankly we’re tired of Arduino having a bad name here at Hackaday. So [Brian Benchoff] came up with a way to make it useful to a wider audience. His creation, which we call the HaDuino, lets you use the Arduino clone to open a tasty bottle of beer. This is an absolutely beautiful board. Click on the image to the left for a high-res view. [Brian] did a fantastic job with the pixellated logo on the back of the board. The top includes some of his snarky comments to help you with populating the components. Beware of the decoupling capacitors on either side of the chip. We think it’s probably a bad idea to use 1k resistors as indicated in those footprints. (Brian’s edit: I screwed up the labels. They’re fixed in the current version) This isn’t the only thing wrong with the design so make sure you keep reading.

Your eyes have probably already picked out the Open Hardware logo. We like to hold open source as a core concept and have made the design files available at our GitHub repository. Hardware is weird to track with Git, but if you are planning to monkey with the board we’d love it if you forked just so other readers (us included) can see the cool stuff you come up with.

This is a farce 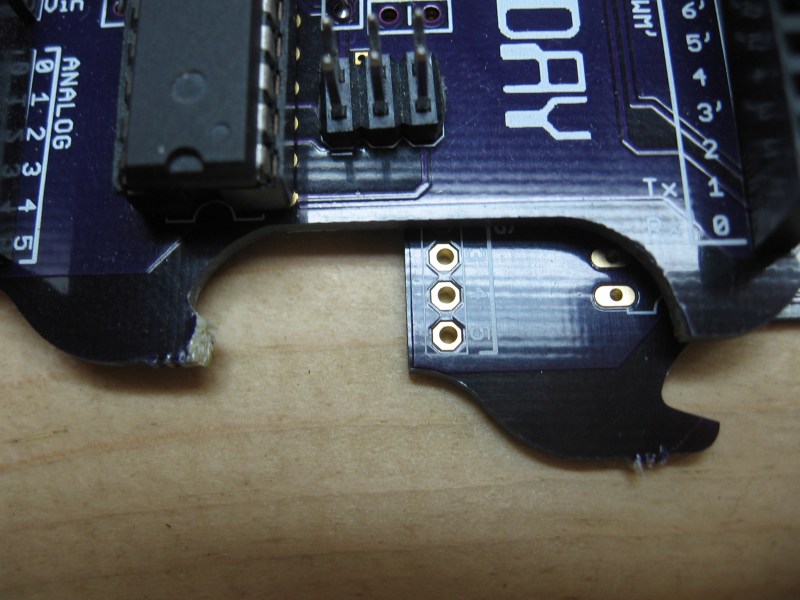 As much as we love the idea, the PCB broke after opening just one bottle of beer. The image above shows the broken populated board next to a pristine copy. But since we thought the idea was hilarious we kept going with the video. All three of the demonstration bottles had the caps “loosened” before filming. In fact you can see the key chain with a bottle opener on it in some of the shots. While we’re spilling the beans, these bottles didn’t even have beer in them. We simply filled empties with water and capped them with a black capper which you can also see in some of the shots. We did this because we’re not in the habit of drinking in the middle of the day. To top that off, this isn’t even an Arduino clone, as we made the lights flash by programming bare metal on the ATmega168.

But enough blabbering. The concept of a PCB shape that can reliably open a bottle of beer isn’t all that far-fetched. We think part of the problem is lack of an appropriately place fulcrum. Also, a more robust protrusion needs to be designed to latch on the underside of the cap. Because the design files are available, this is just screaming for someone to hack up a better version. What are you waiting for?