That profile picture is full of pure joy! Meet [infinityis], aka [David Hoelscher] — don’t worry, we’re not revealing his secret identity; he posted his real name on his profile page.

His entry for The Hackaday Prize is a functional show piece to greet guests when they step into his home. His Waterfall Wall will serve as a way to separate the living space from the entryway. The top portion of it is a water feature which will be edge-lit with LEDs whose color will be controlled wirelessly. The bottom part of the wall will provide some storage space.

Join us after the break to find out more about [David], and check out his THP video for a brief introduction to his Waterfall Wall.

Gaming. When I’m with siblings and/or parents, we’ll play board games (Ticket to Ride, Catan), card games (Flux, Munchkin), or party games (Mafia/The Resistance, Telestrations, Wits and Wagers). I also enjoy playing video games; even though my brother and I live hours apart, we keep in touch regularly when we play games on Steam (Dota2, TF2). When it’s just me by myself though, I like to create by writing software, designing circuit boards, and making physical objects.

I am an Electrical Engineer curious enough to invade the domains of mechanical, software, and systems engineering. I work for a large corporation, and my wife and I own a fledgling startup called Designer Circuits.

Debugging. Whenever there is a bewildering hardware or software problem, I love the process of iteratively breaking down the problem by generating and testing hypotheses to isolate the root cause(s). I always end up learning many new things that help me generate more creative solutions in the future.

It would definitely be some sort of cooking appliance. First, we own a toaster that gets more and more off-kilter as time goes on; one side heats too much and the other side too little. It constantly reminds me of this Calvin and Hobbes comic. Second, there is a microwave at work designed to enrage hungry people: it does not respond to any buttons except “clear” or “start” if the previous user opened the door before the timer finished counting down. If I try to press “cook time” then it just sits there and ignores me as though it has no idea what I want it to do. So to answer the question…what would I do? I’d bat two pieces of equipment at the same time.

For hacking purposes: Linux. With a wide array of free and open source software tools, along with the ability to scale from the tiniest of processors to massive server farms, it is like a breath of fresh air in that you *know* that it is possible to achieve what you want to do with it. My initial thought was a high performance oscilloscope with a big touchscreen, lots of buttons/controls, and high voltage differential probes, but….after further reflection I think my favorite is a Scanning Electron Microscope (SEM). When I would see SEM images in research papers or science textbooks, I assumed that such incredible magnification is a privilege reserved for…well…researchers and textbook authors. I’ve actually been fortunate enough to work with a SEM and it was just as amazing as I’d hoped it could be. The experience was even better than I suspected because you can actually pan/zoom around the sample in real-time and perform spectral analyses, which was not obvious from the textbook pictures. [Image CC BY-SA 2.5] At the risk of betraying my analog/power roots, I’m torn between a microcontroller and an FPGA. I really like the MSP430 for the incredible performance/price ratio and low power consumption. But there was also a particular Altera Cyclone FPGA in my life (you know who you are!) that was incredible to design with: it was basically like a tiny electronics factory. I could dedicate some logic cells to perform simple arithmetic operations, some others to handle communication protocols, and still others to implement multiple Z-transformed digital compensation networks—and all of it operated concurrently and deterministically in a time-bound manner. [FPGA Image]

Python. While the ubiquity and utility of C is undisputable, and I understand why VHDL is the way it is, I feel that the readability, dynamic typing, and interpreted nature of Python is a really good fit for the way I like to work.

How to critically evaluate information. So many pitfalls in life can be avoided simply by continuing to ask questions when things don’t make sense, recognizing the patterns (and inconsistencies) that surround us, and having the courage to act based on independently-drawn logical conclusions.

The front door of our home opens into a room that we decided to use for homeschooling our kids. We wanted a way to visually and physically block off the room while still letting natural sunlight through. We also wanted shelves for the school materials/activities. We looked into various options and decided that glass with a translucent film would work nicely above custom-built shelves. We considered putting plants and soil at the bottom of the glass, or maybe an aquarium, but discarded those ideas on account of the maintenance and incompatibility with a housecat. By instead working toward a waterfall wall with LED illumination, it should provide a pleasant ambiance through soothing water sounds and controllable mood lighting. It also gave me an excuse to use my Raspberry Pi for more than a basic Linux server, get more practice programming the MSP430, and experiment with some low cost wireless modules. 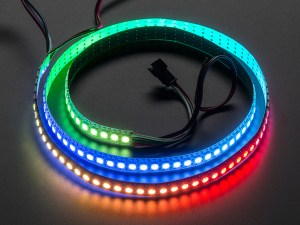 I think one of the most challenging parts of this project will be coming up with an elegant user interface for doing interesting things with a strand of LEDs. Setting all the LEDs to a single color or individually setting each LED to a particular non-time-varying color will be a necessary foundational step. Beyond that, my hope is to come up with an intuitive user interface for real-time manipulation of the LEDs, and/or a simple method of inputting algorithms to generate moving patterns. I welcome any suggestions for how to design such an interface. [Image Source]

A Hoverboard powered by hexcopters. I know the Hoverboard of Back To The Future II and III fame isn’t practical from an implementation standpoint, but if budget weren’t an issue, it seems that a functional equivalent could be constructed with a board suspended by an overhead fleet of quad/hex/octocopters. A critically damped feedback control loop would use range sensors on the bottom of the board to maintain an ideal distance from the ground. As far as mobility goes, lightweight construction and programming the fleet actively to respond to board movement (measured via accelerometer) would help offset the increased mass.

It’s ok to be different.

Everyone has the potential to create. Some people stop challenging themselves or learning new things because of failure (or even just fear of failure). In many cases, the cost of failure is far smaller than what people imagine it to be. Learning new things is hard and prone to failure because all new concepts are foreign concepts until after they are known. Trying something new will always be hard because uncertain paths before us tend to be full of setbacks, twists and turns, and uncertainty about whether they will even lead to success. But it is the “discovery” aspects of both learning and creating that makes them such worthwhile endeavors.