Last week we wrote about the guys over at TwoBitCircus and their upcoming STEAM Carnival. This Thursday we managed to make it down to the Hacker Preview day where they showed us all the toys and games that will be exhibited over the weekend.

The preview day went pretty well until the evening, when unexpected power problems occurred and the site lost power for a little while. But this is why you have a preview day right? Organizer [Brent Bushnell] even commented that he should have put a BETA badge on the ticket. Thankfully the outage coincided with the food truck arriving so everyone stopped for a burger.

Sadly all the fire based pieces were not active on the preview day since they didn’t have the appropriate safety measures in place yet, but they did get to show us most of their games. My personal favorites were the Hobby Horse Racing, and the Laser Foosball.

Here’s a quick run down of some of the stand out pieces. 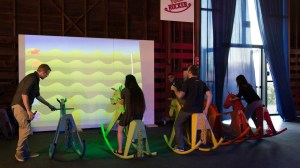 This consisted of 5 hobby horses made from old saw horses! Each horse contained an accelerometer on a microcontroller board, connected to a PC over USB. There was a simple push button on the right rear side of each horse so you could spur your mare on to a win!

The use of saw horses really made this for me. 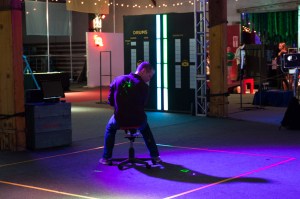 The name threw me for a minute, but this is actually a giant game of Asteroids projected on the floor using a laser projector.

There’s a Wiimote strapped to the front of the chair which is used for detecting movement and acts as your fire button. 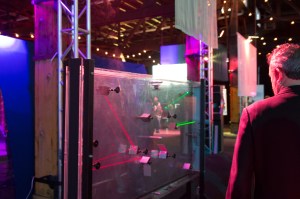 This was produced by one of TwoBitCircus’s intrepid interns. The idea is simple and genius at the same time. You rotate the mirrors to redirect laser beams to make it into your opponent’s goal. Some of the mirrors have blocking panels on them enabling you to play defence, but obviously this impacts your offense too. 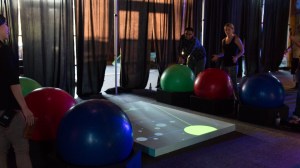 This six player game involves moving giant trackballs around to control your characters in a number of different video games projected onto the floor. Each controller is a 30″ exercise ball on 3 rollers, with an inverted optical mouse below. 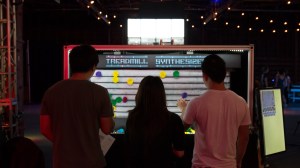 A scrolling felt score lets you add velcro backed dots to play notes in a constantly rolling player piano style synthesizer. OpenCV and a webcam are used to track the position and color of the notes which is then converted into output by the synthesizer. 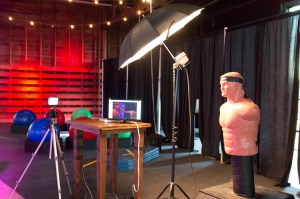 We didn’t catch the official name for this, but we had fun with it anyway. It takes a snapshot of you when you punch the dummy.

This makes for an awful lot of weird and amusing faces. 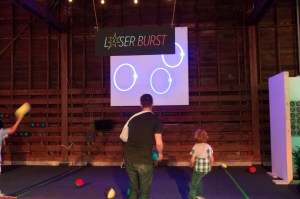 In this game you would throw balls at the laser projected bubbles on the display. A Microsoft Kinect would track the balls and then award you points appropriately. Using a Kinect meant you could actually track multiple balls at a time. This went down incredibly well with the kids.

There were a lot more interactives at the event. Some were non-operational for the evening, like the Reubens Tube hooked up to a theremin, the Immolation Dunk Tank and the Laser Maze. Others were working but we just got distracted by other shiny things, like the re-imagining of Musical Chairs, Giant Wacky Wire and the Intel Edison based game of tag!

If you’re in the LA area this weekend (25th-26th October) then I highly recommend you checkout the STEAM Carnival. Use the code HACKADAY for a $5 discount! If LA is too far for you then stay tuned to TwoBitCircus since they’re hoping to bring this digital circus on a tour of the USA soon.

Sculptures from cut up steel bars

The Hexacade popular as ever

Morph into a celebrity

This thing was scary

A cross between tempest and whackamole

Close up of your eye anyone?

Not sure what this was