The Caption CERN Contest has been going great guns thanks to the community of users over on Hackaday.io. The contest just finished up its seventh week of finding funny captions for images which CERN has in their archives. CERN has decades of great photo documentation of their projects. Unfortunately they don’t know which project each image goes with, or who exactly is in the image. We’re helping them out where we can, by letting CERN know any information we can find on their photos. We’re also having some fun along the way, by giving out a T-Shirt for the best caption each week.

Here are some of the best quotes from week 7

“Are Socks and Sandals acceptable safety equipment for the Demolition Pit? Yes, because these are Kelvar socks and Zylon sandals being testing. Quite uncomfortable, but these feet will survive a close proximity blast.” – [controlmypad]

“Check it out! One tube for each Ninja Turtle” – [OzQube]

“Before the LHC, hunting for the Higgs was much less glamorous.” – [Tachyon]

The winner of course is [Tim] with the featured image at the top of this article. 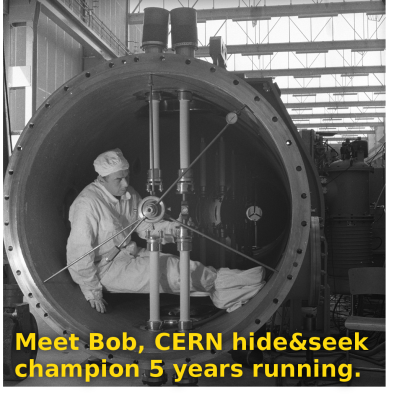 If [Tachyon] sounds familiar, that’s because he came up with the best caption back in week 6. Runners up for week 6 were:

“Damn Mario Brothers ….. ‘gotta save the princess’ How about watching where you’re going for once. – [Scott Galvin]

“Thank god the separator caught him. Another 50 meters, and he’d be nothing but quarks.” – [Curtis Carlsen]

Click past the break to check out this week’s image! 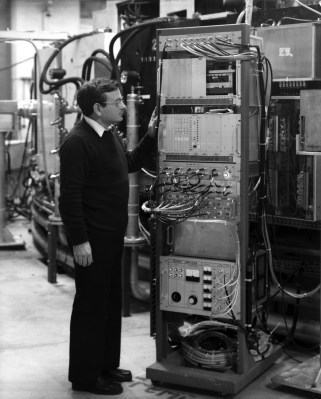 With tens of thousands of captioned images in CERN’s library, we have a lot of work ahead of us! This week’s image features a CERN scientist and a piece of equipment which looks like it is rather special to him. Do you know what is going on in this image?