Accidents happen – but the awesome quotes you all sent in for Week 15 of the Caption CERN Contest were no accident. A huge thank you for our biggest week yet! The scientists in this week’s image are definitely cleaning up after some type of nasty accident. At first blush it looks like an electrical problem in the coils of what appears to be part of a beam line. With all that soot and radiation dangers to boot, only the photographer and the people in the image know for sure!

The winner for this week is [Mr. mmWave] himself, [Tony Long] with “Hardware Accelerator moto – Fail Fast, Fail Often. Also applies to Accelerator Hardware.” [Tony] will be debugging his next microwave mm band ham radio with a Logic Pirate From The Hackaday Store! Congratulations [Tony]!

Week 16: This is not your father’s POV Display! 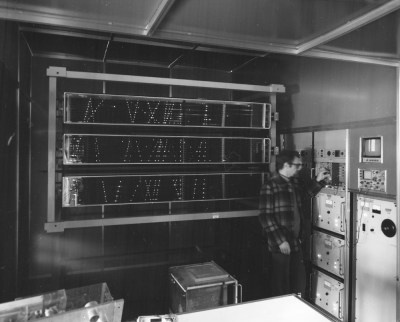 Scientists at CERN have come up with some amazing science advancements. They’ve also needed ways to display the data they collect. This image may depict some incredible new way to display data collected from a high power physics experiment – or it could be a scientist’s project for the CERN science fair. We may never know.

The album is titled CHAMBRE A ETINCELLES DANS EXPO TECHNOL, which roughly translates to “Sparks in the technology expo room”. The lines traveling between the three horizontal display devices definitely appear to be aligned. Are they sparks of electricity? You tell us!

Last week’s prize was a Logic Pirate. This week we’re giving away a Bus Pirate from The Hackaday Store.