Microcontroller-based projects don’t have to be fancy to be fantastic. Case in point: [r0d0t]’s “Musicomatic: the random jazz machine“. Clever programming and a nice case can transform a few servos and a microcontroller into something delightful. 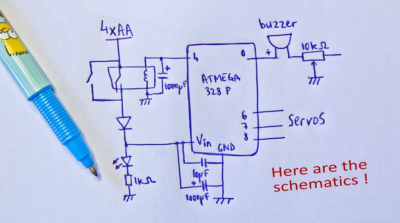 Hardware-wise, there’s really nothing to see here; a speaker and some servos are hooked up to an ATmega328. We think it’s cute to have the microcontroller control its own power supply through a relay, but honestly a MOSFET in place of the relay or better still using the AVR’s shutdown sleep mode would be the way to go.

Nope, where this project shines is the programming. Technically, it might make some of you cringe — full of blocking delays and other coding “taboos”. But none of that matters, because [r0d0t] put his work in where it counts: the music. You simply must hear it for yourself in the clip after the break.

The basis of making music that humans like is rhythm, so [r0d0t] doesn’t leave this entirely to chance. The array “rhythms” has seven beat patterns that get randomly selected. The other thing humans like is predictability and repetition, so choruses and “improvs” repeat as well. All of the random notes are constrained to the pentatonic scale, which keeps it from ever sounding too bad. (The secret sauce of Kenny G.)

In short, [r0d0t] packs a lot of basic music theory into a very basic device, and comes up with something transcendent. We’re a bit reminded of the Yellow Drum Machine robot, and that’s high praise. Both projects are testaments to building something simple and then investing the time and effort into the code to make the project awesome.

For another slice of [r0d0t]’s excellent minimalist pie, check out his take on the classic Snake game: Twisted Snake.