Last Friday we closed the first round of Astronaut or Astronot, the first round of community voting for the Hackaday Prize. We tried to give away a $1000 gift card for the Hackaday Store to a random person on Hackaday.io if they have voted. The random person selected didn’t vote, but we did manage to give away some t-shirts to people who did vote.

Now that we’re well into the second round of community voting, and it’s time to select the community choice for the project Most Likely to Save The Planet. DO THAT HERE.

With that said, here are the projects voted by the hackaday.io community that are the Most Likely To Be Widely Used: 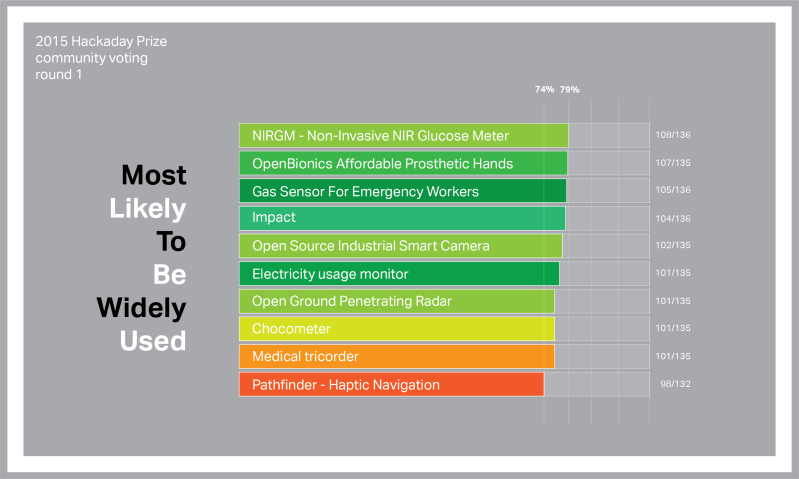 The projects voted Most Likely To Be Widely Used by the hackaday.io community are, in order:

Congratulations everyone who was voted to the top. These projects will be getting a fancy Hackaday Prize t-shirt that even I don’t have.

Round Two: Most Likely To Save The Planet

Right now we’re in the middle of the second round of voting. The theme is “Most Likely To Save The Planet”. How do you pick which projects you think are most likely to save the planet? Head on over to the voting page and pick some projects.

Next Friday, around 22:00 UTC, I’m going to go through the voting database and pick a random person on hackaday.io. If that person has voted in the current round of voting, they get a $1000 gift card for the Hackaday store. Your votes from the last round do not carry over. If you want a chance at winning the gift card, you need to vote this week.

At this stage in the community voting during last year’s Hackaday Prize, I calculated the cumulative probability of giving away a big prize to someone on Hackaday.io who voted. The result was about 0.70. We ended up giving away an oscilloscope, a Bukito 3D printer, an awesome power supply, and a goodie bag filled with programmers, bench tools, and dev boards. That’s four winners, when I originally guessed we would have had – maybe – one winner. We’re going to give away a gift card for the Hackaday Prize eventually, the only question is if you’re going to vote or not. Vote now.

If you are incapable of understanding how this works, here’s a video tutorial on how to vote. Vote now, and good luck to everyone who has a project up in the Hackaday Prize.

23 thoughts on “New Round Of Astronaut Or Not: Most Likely To Save The Planet”