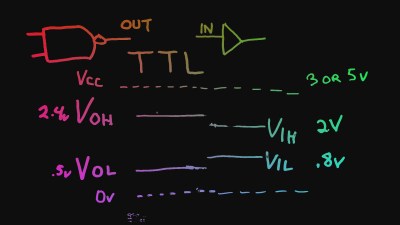 In short the output gate generates a slightly larger signal than required by the input gate; the difference between the output and input voltages allows for some loss of signal and/or the addition of some noise into the equation. This difference is often referred to as the noise margin.

The TTL signal levels are usually the same, or very close for both “standard” 5 volt TTL and for low voltage 3.3 volt TTL, often referred to as LVTTL. While this would sound like they should then be able to connect together safely there is however a specification for most TTL/Bipolar logic families that states that the input signal cannot exceed the power supply by more than a few tenths of volts.  There is a  possibility that a 5 volt gate may generate more than 3.3 volts on its output, hence the problem.

There are logic families such as 74AHCT that are tolerant of higher voltages than their power supply on their inputs, however this is a CMOS family and will be discussed in the next post.

Before I do a quick summary of the Bipolar/TTL families let me first explain what a “Schottky” family logic device is and where it gets its speed improvement from. 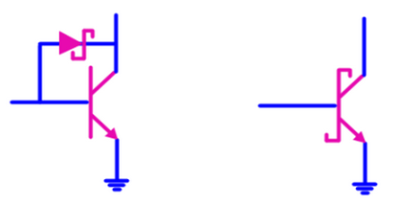 A transistor when used as a switch can go into a state known as saturation. Part of the definition of “transistor saturation” includes the state when both Base-Emitter and Base-Collector junctions are forward biased, however the property of interest here is that it is also slow to turn off as there is an excess of charge built up that has to be drained off first before the device starts to respond. A Schottky diode across the base-collector junction effectively holds the transistor right on the edge of being turned “on” and keeps excessive charge from building up. A transistor paired with a Schottky diode in a gate is often redrawn as shown above on the right.

Here you can see the bipolar TTL based families. Some of the families above are also able to sink and source a lot of current which we will also compare to their CMOS counterparts in the future.

Lastly if you remember the last post which covered Basic Logic, I asked about a risk of a glitch in the circuit shown below on the left. The glitch would arise when “D” changes state because in theory there is a time when one equation, known as a term, has stopped being true before the other term has become true. In fact the D signal itself is not needed as the two sets of terms were otherwise identical

Looking at the circuit on the right; have we gotten rid of the possibility of the glitch since the terms are no longer otherwise equal?