It’s really simple to come up with a laundry list of how adding 3D scanning to medical procedures isn’t feasible. It would add a huge amount of expense in the form of equipment, personnel, and training. But I would wager the same arguments came up when first introducing MRI technology and look where we are with that now. Most neurological problems include Magnetic Resonance Imaging (MRI) as a diagnostic tool. For ailments where MRI is not ideal, the CT scan is used, and even more widespread is the use of ultrasound imaging technology. It’s worth looking at some of the highly touted emerging medical tech to see if we can figure out where it’s leading us. So if money and manpower weren’t issues, what role would 3D scanning play in healthcare?

My Teeth and Your 3D Printed Cast

I jumped on this magic carpet ride after seeing several instances where 3D printed casts were being heralded as the new hotness. They are tailored for the patient’s limb, impervious to water, allow the skin to breathe, and can be designed with Low Intensity Pulsed Ultra Sonic (LIPUS) modules which clip into the cast’s structure to speed healing. Here we see the Osteoid Medical Cast which includes those ultrasonic elements, and the Cortex Exoskeleton, but there are other non-arm examples like the ZDRAVPRINT.

The LIPUS has been through clinical trials, but the 3D printed casts themselves have not. A little bit of interesting design sure makes it look futuristic and that never hurts in selling an idea, however

In thinking about a 3D printed cast, I wondered where they got the model for the cast. How do you know what the arm is supposed to look like when the bone is set and the swelling is gone? The answer is that they don’t. The x-ray of the bone, and a 3D scan of the currently broken (and undoubtedly swollen) arm are used to make the model. In other words, this is medically quite similar to wrapping plaster and bandages around the swollen arm after setting the bone. Hygienically it should be better since plaster and bandage can soak up moisture and get nasty — and all 3D printed cast companies are touting that fact as loudly as possible.

It was at this point that I thought about my teeth, which are hanging out in a box in my basement right now. As a brass playing musician it concerns me that I might get in an accident and knock my teeth out. So I had a cast made of them. The idea is that I can take this along to an emergency dental visit and the dentist will use it to put my pearly whites back exactly as they were before the trauma. Could this work for bones as well? Maybe.

The problem is that breaking a bone isn’t like separating LEGO pieces that can be put back together exactly the same way. Sometimes bones are broken into multiple pieces which may require surgery and the insertion of hardware to complete the repair. In these cases the doctors are doing the best they can just to get the bone back together so that it’s functional once healed. They often using the symmetry of the body as a reference to how the repair should look in the end. In this case having a high-resolution 3D blueprint of your body doesn’t have that much benefit.

But in keeping with the analogy of teeth, for simple breaks it may be possible to design progressive casts that take into account the original state of your broken limb, and its current broken positioning. This is similar to how Invisalign dental braces work. Unfortunately doesn’t help my argument for pre-emptive 3D scanning. In the case of invisalign, your teeth are modeled in naturally crooked orientation, then straightened by the computer. If progressive 3D printed arm braces are only going to work for simple breaks, there’s no need for a starting 3D model. 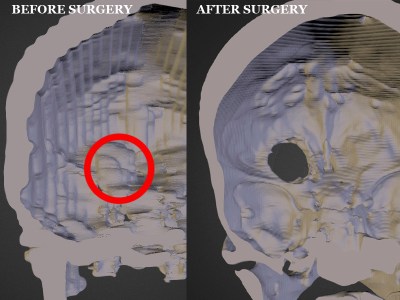 Pivoting away from casts, imaging technology has long been the cutting edge in medicine. The machines themselves produce fantastic data, and we’ve seen examples of how using this data to assemble 3D models is hugely beneficial. For instance, there’s a fascinating story of a brain tumor treatment greatly aided by an enthusiast’s 3D modeling skills. The data sets from the scans were rendered in 3D by the patient’s Husband to find the tumor hadn’t grown as rapidly as had been thought from a second MRI. These models were then used to print a physical model for planning the surgery.

A less concrete example is this pencil cup. It’s a highly accurate model of a man’s face based off of CT scan data. Obviously there’s nothing revolutionary about printing 3D models with low-resolution plastic printers. But the parsing, assembling, and visualizing of the data speaks volumes. It should be noted that Computer Tomography scanning uses X-rays, and it’s almost impossible to argue that exposure is warranted in preventive cases. MRI technology doesn’t pose the same risk.

If we make scanning data like this available, and encourage people to come up with interesting uses for it, the next breakthrough could happen in a hackerspace, basement, garage, or on the couch while Big Brother drones along in the background. Considering how the general public reacted regarding privacy issue with TSA backscatter radar, making public high-resolution scans of people’s bodies isn’t going to happen soon, if ever. But it is tempting to think about the potential of crowd-sourcing medical scanning research. 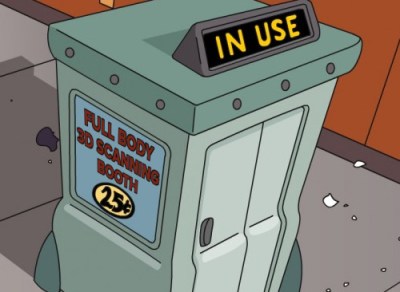 Even if we could find a great reason to image our bodies on a regular basis, it still can do more harm than good. One example is over-diagnosis. If you are scanned and examined regularly it increases the odds that some ailment will be found, and that includes false positives.

I found this Science Friday discussion to be very informative. There is an incentive for companies that make scanning hardware like MRI machines to encourage scanning as preventative medicine. But this drives up costs and increases over-diagnosis.

The solution is to take the NSA approach to full-body scanning. You collect the data but you don’t look at it. The scans only get pulled out when “trying to put Humpty Dumpty together again”. You could simply walk down to your neighborhood 3D scanning booth and have yourself MRI’d. Unfortunately this tech costs around $3M new and is unlikely to come down in cost.

The popularity of 3D printing has the power to revolutionize all realms of technology. But so far I’m still searching for the route that allows it to take widespread hold of how we repair our bodies and help them last longer. If you have a gut feeling of where this is all going, I’d love to hear about it in the comments below.

48 thoughts on “We Should 3D Scan People”