END_OF_DOCUMENT_TOKEN_TO_BE_REPLACED

Why in the world does helium kill iPhones and other members of the Apple ecosystem? Enquiring minds want to know, and [Ben Krasnow] has obliged with an investigation of the culprit: the MEMS oscillator. (YouTube, embedded below.)

When we first heard about this, courtesy in part via a Hackaday post on MRI-killed iPhones, we couldn’t imagine how poisoning a micro-electromechanical system (MEMS) part could kill a phone. We’d always associated MEMS with accelerometers and gyros, important sensors in the smartphone suite, but hardly essential. It turns out there’s another MEMS component in many Apple products: an SiT 1532 oscillator, a tiny replacement for quartz crystal oscillators.

[Ben] got a few from DigiKey and put them through some tests in a DIY gas chamber. He found that a partial pressure of helium as low as 2 kPa, or just 2% of atmospheric pressure, can kill the oscillator. To understand why, and because [Ben] has a scanning electron microscope, he lapped down some spare MEMS oscillators to expose their intricate innards. His SEM images are stunning but perplexing, raising questions about how such things could be made which he also addresses.

The bottom line: helium poisons MEMS oscillators in low enough concentrations that the original MRI story is plausible. As a bonus, we now understand MEMS devices a bit better, and have one more reason never to own an iPhone.

END_OF_DOCUMENT_TOKEN_TO_BE_REPLACED

We live in a world where anyone can build a CT machine. Yes, anyone. It’s made of laser-cut plywood and it looks like a Stargate. Anyone can build an MRI machine. Of course, these machines aren’t really good enough for medical diagnosis, or good enough to image anything that’s alive for that matter. This project for the Hackaday Prize is something else, though. It’s biomedical imaging put into a package that is just good enough to image your lungs while they’re still in your body.

The idea behind Spectra is to attach two electrodes to the body (a chest cavity, your gut, or a simulator that’s basically a towel wrapped around the inside of a beaker). One of these electrodes emits an AC signal, and the second electrode measures the impedance and phase. Next, move the electrodes and measure again. Do this a few times, and you’ll be able to perform a tomographic reconstruction of the inside of a chest cavity (or beaker simulator).

Hardware-wise, Spectra uses more than two electrodes, thirty-two on the biggest version built so far. All of these electrodes are hooked up to a PCB that’s just under 2″ square, and everything is measured with 16-bit resolution at a 160 kSPS sample rate. To image something, each electrode sends out an AC current. Different tissues have different resistances, and the path taken through the body will have different outputs. After doing this through many electrodes, you can use the usual tomographic techniques to ‘see’ inside the body.

This is a remarkably inexpensive way to image the interior of the human body. No, it doesn’t have the same resolution as an MRI, but then again you don’t need superconducting electromagnets either. We’re really excited to see where this project will go, and we’re looking forward to the inevitable project updates. 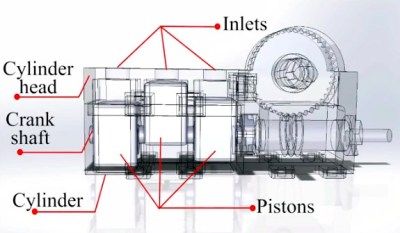