Under the right conditions, a gamma ray, which is just a very high frequency electromagnetic wave, can turn into an electron-positron pair. A positron is the anti-particle of the electron. It has the same mass as an electron, but

opposite charge and spin. If the two particles touch, they will turn back into the gamma ray. It’s a basic demonstration of E = mc². But what we’re interested in is the electron – positron pair. Because they were formed from the same gamma ray, the two particles are said to be entangled. Entangled meaning a change to one will affect the other. Now, according to quantum theory, one cannot know the state of a particle until it is observed and the process of observation will destroy other states. For instance, if we observe with precision the position of our electron, we destroy information about its momentum. What affect will the observation of the electron have on the positron? Remember, the two particles are entangled. What happens to one will affect the other. If I observe the position of the electron, then the positron can no longer be considered in an unobserved state. The observation will result in a collapse of the wave function. Because the two particles are entangled, they share the same wave function. Without getting mired in the details – the EPR Argument can be summed up as follows:

By measuring the position OR momentum of the electron, we can know that the positron possesses a position or a momentum. And we can know this without directly observing the positron. Quantum theory denies we can do this. And if things couldn’t get any weirder – this will be true regardless of the distance between the particles. If you make an entangled electron-positron pair, and send the positron off to the nearest galaxy, it changes nothing. When you observe the electron, the wave function collapses for both particles. Instantly. Einstein would go on to argue that such “spooky action at a distance” as he put it, is not compatible with special relativity and its cosmic speed limit.

[Bohr’s] response to the EPR Argument can be summed up as follows:

Yeah, so what? You can’t make such a measurement anyway. So it doesn’t count. ***blows raspberry***

Two Boxes, a Ball and a Cat

[Einstein] loathed the New York Times article and all the attention it was bringing. [Bohr’s] response was predictable, and shed no new light on the paradox. He expressed his frustrations in several personal letters between himself and [Erwin Schrodinger] – a fellow opponent of the Copenhagen interpretation of quantum physics and inventor of wave mechanics. In one of the letters, he summed up his feelings of the theory in a simple thought experiment:

Suppose you have two boxes. Each box has a lid. Removing the lid and looking in a box is considered an observation. In one of the boxes is a ball. There is a 50:50 chance the ball is in the first box. The question is – is this a complete description? Can we know any more information? The answers might surprise you.

A) No, it is not a complete description. There is no way we can predict with certainty which box the ball is in, and must resort to probabilities.

B) Yes, it is a complete description. The ball exists in a predetermined state and not in either box. Opening the lid causes the ball to materialize in one of the boxes. Multiple tries would show that we would find the ball precisely 50% of the time. The description of the box before opening the lid is governed only by probability. There is no reason to look any further for a description.

Einstein was showing the absurdness of the (then) current view of quantum theory on a macro scale. He couldn’t have known that he had just planted a seed in a mind just as brilliant as his own. A seed that would soon grow into one of the greatest paradoxes in all of human history – [Schrodinger’s] Cat.

In the 1930’s, it was only possible to talk about what might happen if you did Experiment A and made Observation B. As time went on and technology advanced, it became possible to actually test some of these thought 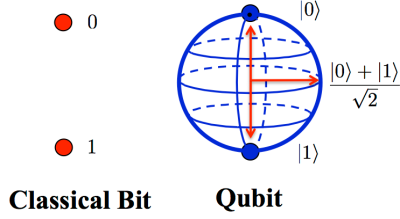 experiments, including quantum entanglement. And so far, the evidence suggests that [Einstein] was wrong. It appears the description of the ball in the two boxes was indeed complete. As absurd as it sounds, it’s true. In the quantum world, the falling tree does not make any sound. Quantum entanglement is a mathematically, experimentally proven reality, and somehow entangled particles are linked together outside the realm of space and time. The question is – can we use it to our advantage?

It should be noted that [Schrodinger’s] Cat remains an unsolved paradox. While the current quantum theory and its quantum mechanics continue to stand firm when challenged with experiment, there are some serious philosophical issues with it. 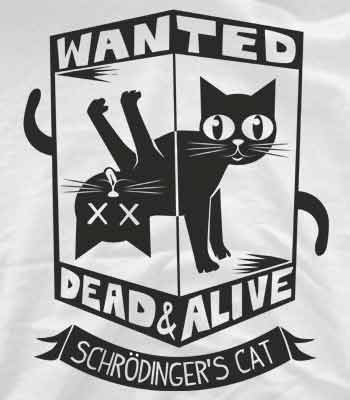 It goes something like this. A cat is placed in a box with a Geiger counter, a radioactive substance, a jar of poison and an Arduino. The half life of the radioactive substance is known such that there is a 50% chance one atom will disintegrate within one hour. If an atom disintegrates, the Geiger counter will tell the Arduino to break the jar of poison and kill the cat. If no atom disintegrates, the cat lives.

Quantum theory says the action of the atom disintegrating or not disintegrating cannot be known until the observation is made. So the cat is both alive and dead at the same time, the end result is only determined by looking in the box. The act of observing collapses the wave function and the atom is forced into a disintegrated or non-disintegrated state.

What [Schrodinger] did with this very cruel paradox is bring the quantum world and its laws into the macro world. It highlights the fact that the “collapse of the wave function”, a foundation of quantum theory, is a postulate. Who gets to say when the wave function collapses? Why can’t it be the measuring instrument measures the radiation? Why does it have to be by a conscious observer? If it is indeed the observer, one can argue that someone is observing the observer; and will see the observer find a dead cat 50% of time, and a live cat 50% of the other. Who is observing that observer? God? OR, could there be two realities… two universes – one where the cat lives and one where it dies?

There is still a lot to be said about quantum theory. No one knows the boundary where quantum theory ends and classical mechanics begins. It is indeed very useful in making predictions in the outcomes of experiments. But is it a true description of reality? [Michio Kaku] has some thought provoking words on this, as can be heard in the 2.5 minute video below.

Articles in the Quantum Mechanics in your Processor series:

54 thoughts on “Quantum Mechanics In Your Processor: Quantum Computing”