In the wee hours of the late 17th century, Isaac Newton could be found locked up in his laboratory prodding the secrets of nature. Giant plumes of green smoke poured from cauldrons of all shapes and sizes, while others hissed  and spat new and mysterious chemical concoctions, like miniature volcanoes erupting with knowledge from the unknown. Under the eerie glow of twinkling candle light, Newton would go on to write over a million words on the subject of alchemy. He had to do so in secret because the practice was frowned upon at that time.  In fact, it is now known that alchemy was the ‘science’ in which he was chiefly interested in. His fascination with turning lead into gold via the elusive philosopher’s stone is now evident. He had even turned down a professorship at Cambridge and instead opted for England’s Director of Mint, where he oversaw his nation’s gold repository.

Not much was known about the fundamental structure of matter in Newton’s time. The first version of the periodic table would not come along for more than a hundred and forty years after his death. With the modern atomic structure not surfacing for another 30 years after that. Today, we know that we can’t turn lead into gold without setting the world on fire. Alchemy is recognized as a pseudoscience, and we opt for modern chemistry to describe the interactions between the elements. Everyone walking out of high school knows what atoms and the periodic table are. They know what the sub-atomic particles and their associated electric charges are. In this article, we’re going to push beyond the basics. We’re going to look at atomic structure from a quantum mechanical view, which will give you a new understanding of why the periodic table looks the way it does. In fact, you can construct the entire periodic table using nothing but the quantum numbers.

We are all used to seeing various drawings and diagrams of atoms with the nucleus surrounded by electrons whose orbits take the shape of concentric circles. While this description is useful in some situations, it is not an accurate description of an atom. The most significant problem with this model is the visualization of the electron in a concrete location. In quantum mechanics, the location of the electron orbiting an atom is described by its wave function, which gives only a probability of where you might find it. This concept is called electron density. The square of the wave function reveals the distribution of electron density in a three dimensional space around the nucleus, and is called an orbital. This distribution can be calculated via the [Schrodinger] equation, whose results form what is known as the quantum numbers.

There are three different quantum numbers:

The values of the three quantum numbers are given in integers. The principal quantum number (n) determines the size of the orbital and its values can range from 1, 2, 3 and so forth. The angular momentum (l) and magnetic (m) numbers are dependent on the principal number. For l, the value is a range from 0 to (n – 1). These values are denoted as letters s, p, d, and f. The m value range can be found with the equation (2l + 1), and the values will follow ( –l…0…+l ) . Once you do the math, you can construct a chart that is much easier to understand: 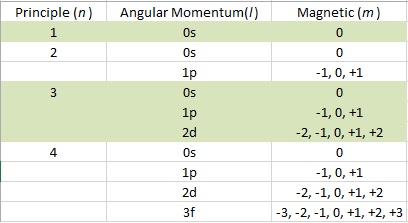 There is a 4th quantum number that is unrelated to the above three called electron spin. It’s written as +1/2 and -1/2. All electrons have spin and they can be only one of these two values.  This spin will play a key role a bit later. For now, we need to understand a little more about how the orbitals exist in space.

According to our chart, there are four different values of l, or four different orbital shapes. The simplest is s, and is spherical in shape. In the n = 2 shell, the p orbital is available and looks something like a peanut. For this orbital, it can have three different values of m. Remember, the m number tells us the orientation in space. But more importantly, it tells us the number of orbitals that are available. In the case of p, the m value is -1, 0 and 1. So we can have up to 3 orbitals on the xyz axes of a Cartesian system. Moving on up to n = 3 puts us at the d sub-shell and gives us up to 5 orbitals. With n = 4, the f sub-shell can hold up to 7 orbitals.  Take a look at the image to the left to get a visual idea of what these orbitals look like in space. Note the f orbital is not imaged as it is difficult to visualize.

Once you understand how the quantum numbers give rise to the orbitals, we can move on to see what happens when we fill them up with electrons.

We now have enough knowledge to begin solving the periodic puzzle. But first, we must pay a visit to the lab of Mr. Wolfgang Pauli and acquire a key piece of (often overlooked) information. His Pauli Exclusion Principle tells us that no two electrons can have the same quantum number. What does the even mean?

Well, let’s take a look at the simplest atom – hydrogen. It has one proton and one electron. In its lowest energy, or ground state, the electron will exist in the smallest orbital s in the n = 1 shell. The next element in line is Helium with two electrons. Mr. Pauli says no two electrons can share the same quantum numbers. Now let us remember the 4th somewhat obscure quantum number of spin. This allows the two helium electrons to share the same s orbital in the n = 1 shell so long as their spins are opposing. When two electrons share the same orbital (with opposite spin), they are said to be paired. On an unrelated note – this pairing gives the electrons a very interesting and somewhat mysterious property that would spark a paradox that came close to bringing all of quantum physics to a halt. I go into detail about it here if you need a little more light reading.

We now have enough knowledge to build the periodic table from scratch.  The electron configuration for hydrogen can be written as 1s1, where:

Now we’ve reached our first Noble Gas, Neon. Notice the entire p sub-shell is full. Why is it full? Because the p sub-shell has three m values. Each of these is an orbital, and two electrons can fit in each orbital.  A full p sub-shell means two things. 1) Neon should be very stable and 2) we must move to the n = 3 shell. You should now be able to figure out the electron configuration for Sodium – 1s22s22p63s1. You should also notice that we’re repeating a lot of information. It is customary to use the last Noble Gas to abbreviate the core electrons. In the case of sodium, we would write Na = {Ne}3s1.

If you keep on going, you can build the entire periodic table. Consider the image below.

Here we have the periodic table showing only the valence, or outer electrons in each element. It is these outermost electrons that determine an element’s reactivity. Some patterns should stand out. Take a look at the Noble Gases in the right magenta column. All (excluding He) have a completely full p sub-shell. This explains why they won’t react with anything. The elements in the column to the left of it in light green are known as the halogens. Halogen means ‘salt producing’ and, because they only need a single electron to fill their p sub-shell, are highly reactive. Where can they get that single electron? How about an element with only one valence electron, such as the ones in the yellow left most column. Does NaCl ring a bell?

As you see, one can take the entirety of the Periodic Table of the Elements and begin to understand how elements relate to and react with each other via the configuration of the valence electrons. While many of the relations have been known for hundreds of years, it wasn’t until the development of quantum mechanics that we understood precisely how the electrons were configured within each element. It is amazing to think how this level of understanding of what nature is made of can be traced back to a very simple question with a profound answer –  “Is it a particle or wave?”