Humans may all have the same overall form, but when we need to find a suitable replacement for a missing limb, it’s clear that between the variety of finger-lengths and hand-breadths, a one-size-fits-all prosthetic just wont cut it. OpenBionics puts a spin on today’s approach to prosthetics, putting forth a framework of tools that’s flexible enough to fit the spectrum of hand shapes and enables us to create our own prosthetic at home that can meet the challenge of most everyday tasks.

Minas Liarokapis of the OpenBionics team gave a talk at this year’s Hackaday SuperConference which covered the design considerations and unique features of the project. This incredible work was recognized with 2nd Prize in the 2015 Hackaday Prize. Watch Minas’ talk below, then join us after the break as we cover more details that went into developing this prosthesis. 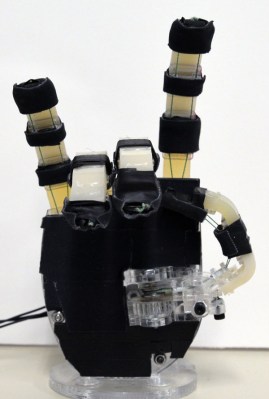 Today’s prosthetics are expensive. Why? Many of these solutions are the result of numerous custom parts that require a complicated fabrication process, not to mention the torque-dense, size-constrained motors that need to drive these mechanisms. With an expensive price tag, it’s easy to try to design the all-encompassing uber-hand and, along the way, completely miss a specifc use-case as simple as grasping a water bottle.

The folks at OpenBionics took a different approach. Rather than reach for the all-encompassing uber-hand first, they characterized their problem and determined to aim for a prosthetic that would assist in everyday tasks. With a constrained problem, they could start to model a solution that would be both flexible and inexpensive for the person who needed it. 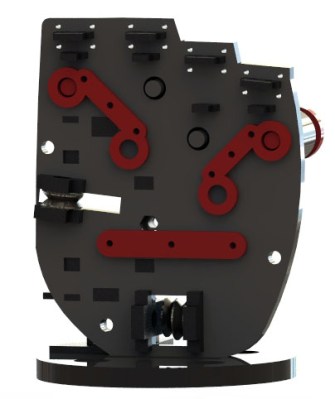 Mechanically, the design is an engineering triumph. With only two motors and a clever indexing mechanism, their hand can accommodate 144 different postures that can fit most of everyday life’s tasks of grasping, pinching, and pointing. The first motor switches which of the index fingers will follow through with the hand-close gesture, the second does the heavy-lifting of tensioning the remaining fingers to a close with the cables. With only two motors, OpenBionics saved weight and cost without sacrificing a comprehensive library of poses to tackle everyday life.

Today’s rapid prototyping tools enable us to quickly spin functional elements that aren’t constrained by the dimensions of stock parts. OpenBionics jumped on this feature by creating a resizable CAD model for their prosthetic. Rather than limiting the design to a single size, key values taken from the amputee’s other hand define parameters that drive the final dimensions of the hand to be fabricated. Finally, given that not all tools are available to any given person, their design ports easily between a laser cutter and 3D-printer. With a problem that’s as unique as the shape of every human body, OpenBionics has given us a parametric framework that will change shape with it.

OpenBionics’ prosthetic toolchain falls into a similar stride with concepts like templated meta-programming. Whilst programming, there are times when we need some data structure like a queue or ring buffer. We’ve written them a few times before, but the guts of the program isn’t a task we want to write a third time. While we can’t entirely copy-paste an old solution since our new problem has different parameters, we can, however,  punch those parameters into a template that then generates the desired data structure of our choice with our desired key features.

Just like in metaprogramming, we input the parameters of our desired outcome, and the tools do the heavy-lifting of generating that outcome. OpenBionics takes this notion and applies it to the generation of a real-world object, a prosthetic that’s as unique as the person wearing it.

With a design workflow that assumes its user will have another hand from which to base the parameters of the prosthetic, OpenBionics isn’t looking to be the end-all solution to all types of amputees. Nevertheless, it doesn’t need to be! Rather, the team behind OpenBionics has set an example of the good work we can do serving others with close-to-home tools. They’ve shown us that it doesn’t take millions of dollars to make a difference, that we can create solutions which can reshape themselves to match the problem, and that, yes, we can actually 3D-print something else besides Christmas ornaments. OpenBionics takes a fantastic 2nd place in this year’s Hackaday Prize by giving each of us the tools to incarnate a few button clicks into our very own prosthetic.