While many engineers might desire the 3458A, it is an object of fascination to one particular group. I speak of course of the cousin of the time nut… the volt nut. Time nuts often find themselves needing to conduct highly accurate voltage measurements in order to calibrate their precision frequency standards and thus spawned a separate mailing list to discuss these topics. Much of the discussion on this list centers around the 3458A, how to calibrate one, long term stability measurements, and how to care for their beloved meters. And of course reports of the occasional auction score (I have to admit to eyeing these jealously, after spending hours trawling eBay for a bargain and ringing numerous surplus stores).

At the heart of the 3458A lies a precision voltage reference. Voltages references are in principle quite simple devices, their goal is to output at all times an exact precise stable voltage of a known value. References have numerous applications but in the 3458A it’s used as part of its multislope ADC. The input voltage is effectively compared against this reference value in order to determine the input voltage. Its accuracy is therefore of paramount importance.

Roll Your Own Precision Reference

The LTZ1000 is an ovenized zener reference. You’re no doubt familiar with zener diodes and their clamping applications (if not Afrotechmods has a great tutorial). It’s their ability to “clamp” an input voltage to a specific lower value that makes them ideal for use as references. The zeners “clamp” (reverse breakdown) voltage varies with temperature. For better stability the LTZ1000 therefore uses an on-die resistive heater to keep the diode at a constant temperature (much like an ovenzied oscillator).

The LTZ1000 has found favor with voltnuts seeking to build precision references using this part. Some have used the reference board from the 3458A. But others, like TiN have designed their own. TiN has documented his work in exquisite detail over on the EEVBlog forums, describing not only the PCB layout but also extensive thermal modeling. That is what you see pictured above.

Izumo Sangyouza has also been building LTZ1000 references. though unlike TiNs, few details are available, the boards look awesome however and though the forum posts are in Chinese, the videos included stand as testament to the accuracy of his references. But Izumo’s blog holds an additional surprise for the avid volt nut. The picture below perhaps says all that needs to be said.

The multimeter shot below uses the AD5791 in concert with a stable reference to provide incredible precision. While the post doesn’t specify, it’s a safe bet that one of Izumo’s LTZ1000 voltage reference boards is being used in this case. Having recently played around with the AD5791, I can only stand in awe of Izumo’s work.

Look at all those lovely digits

A liquid nitrogen cool Josephson junction reference and HP 3458A

The LTZ1000 is the best generally available reference and the 3458A the best meter. But one question remains, what do you use to calibrate it?

The IEEE have create a video on the basic physics and the evolution of the Josephson junction. Through the efforts of  Quantum Electrical Metrology Division and others, chips incorporating thousands of such junctions on a single device have been fabricated and provide standard values accurate to within nanovolts. This basic physical property is now used to calibrate all precision multimeters. 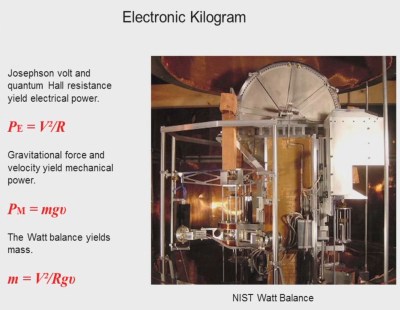 There’s one final twist in the story of the volt nut. While most of our measurement standards are based on a fundamental physical property the standard kilogram is a lump of metal which sits in a vault in Paris. This is of course, pretty unsatisfactory. Over the hundreds of year that this lump of metal has been sitting around, it has lost mass as it has been cleaned and handled.

Standards communities now seek to replace this with an “electronic kilogram”. Their system balances the mechanical power of a weight under gravity and the force exerted by an electromagnet. This electrical power is of course measured in terms of the Josephson standard volt.

Brian Josephson won the Nobel prize for his contributions to the development of the Josephson junction reference, perhaps making him the ultimate volt nut. But for now such references lie outside the domain of the average hacker. Perhaps someday, like atomic clocks before them, industrial applications will drive the price down so that every volt nut can have their very own standard. Until then the quest goes ever on.

30 thoughts on “Nuts About Volts”