Fixed wing remote control planes are ridiculously overpowered. Whereas normal, manned fixed wing aircraft need to take into account things like density altitude, angle of attack, and weight limits, most RC aircraft can hover. This insane amount of power means there’s a lot of room for experimentation, especially in new and novel power plants. [Samm Sheperd] had an old squirrel cage fan taken from an electric wall heater and figured one man’s trash was an integral part of another man’s hobby and built a plane around this very unusual fan. 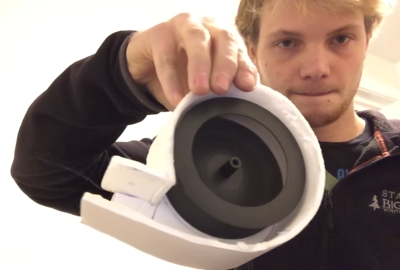 The only part of the squirrel cage fan [Samm] reused was the impeller. Every other part of this power plant was either constructed out of foam board, plywood, or in the case of the brushless motor turning the fan, stolen from the ubiquitous box of junk on every modeller’s workbench.

The design of the plane puts the blower fan directly under the wings, blasting the air backwards underneath the empennage. During testing, [Samm] found this blower pulled around 350W from the battery – exactly what it should draw if a properly sized propeller were attached to the motor. The thrust produced isn’t that great — only about 400g of thrust from an airframe that weights 863g. That’s very underpowered for an RC aircraft, but absurdly powerful for any manned flying machine.

Does the plane work? Of course it does. [Samm] took his plane for a few laps around the neighborhood and found the plane flies excellently. It is horrifically loud, but it is a great example of how much anyone can do with cheap RC planes constructed out of foam.