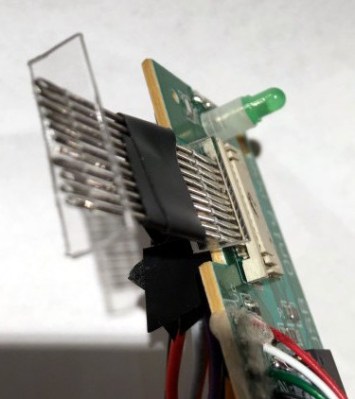 His plan was to connect wires from the payphone keypad to a USB numeric keyboard. These wires were soldered to the through hole via’s on the old payphone keypad PCB. Hooking up these wires to the USB keypad required drilling 0.5mm holes spaced 1mm apart using his Dremel on a piece of acrylic, lots of sewing needles, super glue, Sugru and a couple of days to track down dodgy connections.

Working late at night, and without a TRRS jack handy, he chopped off an old cable and somehow managed to solder its ultra-thin wires to a pin header. A corresponding socket was soldered to the four wires from the headset for the speaker and the microphone. And lots of epoxy goop to hold it all together.

The Raspberry Pi 2 B doesn’t have an audio input, so he needed a Cirrus Logic audio hat for the Pi. He had trouble getting ALSA to tango with the Audio hat, so he eventually wrote some of his own code to detect keyboard buttons and play or record messages.

Finally, he needed to detect the hook switch status. Sounds simple, but it took him a few more days to get it to work. Turns out the audio hat was causing all unused GPIO pins to act “floating” no matter which way he tried. Finally, after trial and error, he bent one pin on the Pi so it wouldn’t connect to the audio hat, and wired the hook switch to it directly.

His main code was in Perl. In the version of Raspbian he was using, reading pin states worked in Python, but not in Perl – they would always appear floating. Since the underlying BCM2835 library is written in C, he tried writing his code in C, and that didn’t work either. As usual, python was doing its magic under the hood. So he called the Python script from his Perl code to do that, but not before running everything under “root” since that was the only way he could read the status of the pins. Take a closer look by reading section 3 of his blog post, which includes a link to the code.

He had thoughts on adding more features, but having got this much working, he decided to wrap it all up before things headed south. We think there’s more than enough accomplished here for him to be proud of. If you need some introduction to [jwz] as he is known, he’s the guy who worked on emacs, Netscape and Mozilla and has been hacking away since 1985.

Thanks [dr Memals] for sending in this tip.

27 thoughts on “My Payphone Runs Linux”