Our story begins in ancient Greece. Sirens, the Muses of the underworld, would sit around on rocky cliffs to lure sailors into shipwrecking into their island with the beauty of their song. Or so the story goes; we weren’t there. Fast-forward nearly two thousand years to Paris in 1819, where Charles Cagniard de la Tour refines a rotating disk with a bunch of holes in it into a fundamental experiment in physics and acoustics.

Before the siren, people knew that sound was made of pressure waves in air, and they knew that the frequency of these compression waves was related to the pitch, but they had only relatively imprecise ways to measure it. The siren changed all that because the pitch was easily backed out from the rotational speed of the perforated disk, which could be geared down to something turning slowly enough that it was precisely measurable. This lead to a verification of a number of theories about musical pitch and acoustics, and even an estimation of how fast a mosquito beat its wings . To top it all off, the siren also worked underwater, demonstrating that pitch was all about the frequency of the impulses and not related to the density of the medium through which it traveled, and giving it a poetic name.

Sirens were soon built to test out the mathematical ideas that Joseph Fourier had just formalized, and that we now call Fourier analysis. Again, musicians had been making complex tones by combining pipes of different lengths in an organ — “pulling out the stops” — but they didn’t have data. The siren’s nearly-sinusoidal output, combined with the ease of creating accurate frequency ratios, was one of the important first demonstrations of Fourier synthesis.

And even today, the siren demo is a great hands-on way to convince undergraduates that sound waves are periodic pressure variations, because the big spinning disk and air compressor are large, loud, and visible. In this example, a physics professor gets jiggy, playing “Joy to the World” for his class.

Which brings us to music: the siren was named for Muses, after all, not physicists. I’m not sure, but I’d guess that the reason we don’t see mainstream musical instruments based on the siren principle is that it’s a serious engineering challenge. Which is not to say that people haven’t tried.

As an alternative to fixed-ratio gearboxes, modern higher-speed stepper or servo motors should be able to play in tune fairly easily, making this a piece of cake in these modern days. 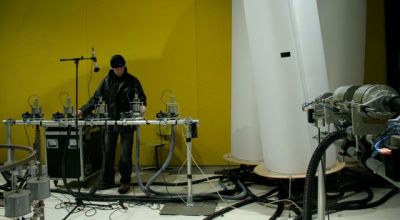 After all, who among us hasn’t played the Imperial March on a CNC machine of some kind or other? So we’re a little bit surprised that our web searches came up with only a few examples, and few details.

That said, Dutch artist Rene Bakker seems to be working on an entire siren orchestra, although all we get are glimpses. This Helmholtz double-siren is straight out of a science lab. His servo-driven siren (YouTube link) is the highest-tech and most straightforwardly musical of the bunch, although for sheer visual impact, we like this version of a turn-of-the century Loman organ (PDF):

Similarly, CCRMA students Gina Collecchia, Kevin McElroy, and Dan Somen built up a cool siren organ for a DIY musical instruments class. You can read the documentation and check out their videos of a siren organ prototype or their performance on three siren organs.

While there’s something romantic about making music directly by pushing air out into the room, it’s hard to amplify. And engineering-wise, if you didn’t have a compressor to haul around and a big spinning disk with all that inertia, things would be a lot easier. It turns out that artists and musicians have been making optical tonewheels — the equivalent of the siren’s disk — since the 1920s. This incredibly detailed tonewheel documentary by synthesizer noisemaker Derek Holzer summarizes an incredible amount of history in one webpage. We’ll get back to a simple optical siren in the DIY section below, but in the mean time, here is a sampling of Derek’s (chaotic and terrifying) optical musical madness. 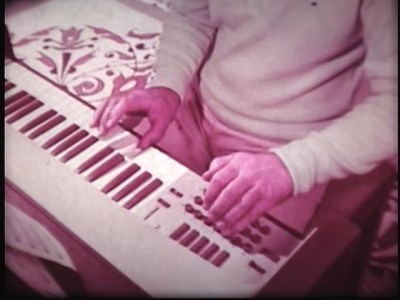 On the other side of the artistic spectrum from Derek, but no less cool, is the cheesy musical wonder that is the Optigan. The Optigan uses optical tonewheels that are more like LP records than simple repetitive waveforms, although it has those too. On the left of the instrument is a bank of buttons that play pre-recorded sample backing tracks, and each key on the keyboard plays a separate track on the disk with its own pitch. In principle, each key could play an entirely different sound as well, but they never went that crazy. That said, a lot of musicians have recorded with Optigans, and one fan is putting out new disks right now.

As an aside, encoding sound optically like this is also how the sound track in films worked: a thin strip ran down the side of early “talking” films and the light intensity that shone through onto a photocell produced a variable voltage, which was then amplified to go along with the movie. (See Wikipedia’s entries for Phonofilm and Photophone on your own time if you’re interested.)

Magnetic Tonewheels and the Mighty B3 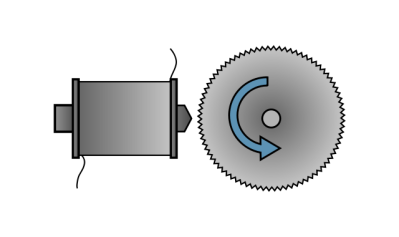 Finally, nearly the same principle is used in the Hammond B3 organ. Each wheel is a disc that resembles a gear with specially-cut non-mating teeth. They pass close to a magnetic pickup that turns the profile of the little wavy teeth into an electric sine wave. Just like the early sound Fourier synthesis experiments, or a pipe organ before that, the output of different wheels can be combined to make a much richer, more interesting timbre.

Keeping nearly one hundred of these spinning tone wheels in sync and running smoothly is no mean feat, even if the sound production method is simple in principle. Hackaday’s own Kristina Panos wrote up a fantastic article on the Hammond organ that includes a video that goes into detail about how they’re made. If you’re a Hammond fan, you should check that out. If you’re not a Hammond fan yet, go listen to some Dr. Lonnie Smith: 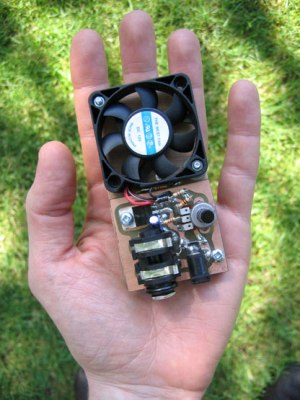 And speaking of fans, if you want to build your own “musical” siren, the most accessible design that I know of comes from Dutch electro-punk Gijs Gieskes, whose work we’ve featured on Hackaday going way back. The first project of his that I ever became aware of is the mini Synth fan, which is nothing more than a computer fan whose blades intermittently block light that shines on a photosensor. Yup, it’s a simple siren, with light playing the role of air.

Gijs has a more elaborate version as well, where a microcontroller controls the fan speed and incorporates a small sequencer with MIDI output. But that’s getting ahead of ourselves. Even by itself, the simple fan siren synth is quite playable. You can tap it with your hand or spin it manually. It’s very hands-on. And if you’re handy with the Arduinos, you’ll know where to take it from there. Check Gijs’ site for the (hand-drawn) circuits.

I made one of these, ages ago, and here’s what I came up with. Everything that’s possible to run from the AVR is controlled by the AVR, and four slide pots connected to the ADCs serve as input. In the end, one pot on the far right controls the fan speed and another scales the output volume. The LED is also driven by a PWM signal, and gets brighter and darker (on average) over time. One pot controls the LED PWM frequency (far left) and the other controls the frequency of a triangle wave that modifies the duty cycle — making the LED get brighter or dimmer periodically. Combining all three of these pitches together: fan speed, PWM speed, and the slowly varying duty cycle, makes for a lot of mayhem.

The device is noisy and has glitches galore. I lost the code so long ago that I can’t post it, but it makes some awesome sounds. In the demo video, I first run just the fan synth part and then add in the LED PWM and its modulation. Good times.

Part of the allure of a device like this is how simple it is, but also how easy it is to make it more complicated. Add a second fan? Control the fan speed to play tunes? If you have one of those fancy fans with the built-in tachometer (look for four wires) making a servo control loop should be fairly straightforward. I built a serial port into the device, so I obviously had grand plans.

Whatever you do, don’t resist the song of the sirens! I hope that I’ve pointed you in enough directions that at least something will strike your fancy. If you build anything that spins and makes music, let us know in the comments here, or in the tip line.

31 thoughts on “Drawn In By The Siren’s Song”