We love the obvious care and attention that has gone into these colorful, cleanly designed, and almost entirely 3D printed devices. The single-spoke wheels are particularly clean and stylish. The files on Thingiverse even include a smartly designed one piece stand. 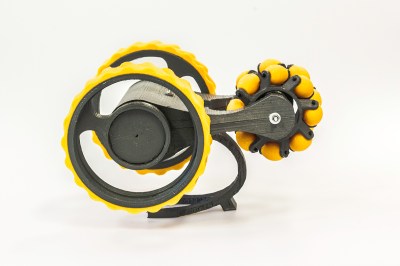 What was it like to design something like this over several years? “It was tough,” says [Aldric Négrier]. “I was caught in the infinite abyss that is the passion for design [but] I don’t regret the time spent there, I have learned a lot of Computer Assisted Design during this process and this has helped me on other projects. For me, the DriveMyPhone is a piece of art.”

To cap things off, [Aldric Négrier] also shared some of the work he did for future additions and upgrades to the chassis including self-balancing with an inertial sensor, tank treads, a rotating mop attachment for cleaning duties, and even a pair of counter-rotating propellers for an airborne assembly called FlyMyPhone which he admits was “probably not a good idea.”

The idea of using a smartphone (which is capable of data over the mobile network) is attractive because your wireless range is not limited to what you can squeeze out of something local like WiFi. We have also seen vehicles outfitted with a WiFi to 3G bridge for that same purpose.