Piano rolls are the world’s longest-lasting recording medium, and its first digital one. They were mass-produced from 1896 to 2008, and you can still get some made today, although they’re a specialty item. The technology behind them, both on the player and the recorder side, is simply wonderful.

[lwalkera] sent us in this marvelous video (embedded below) that provides a late-80s peek inside the works of QRS Records, and the presenter seems to be loving every minute of it.

Player pianos are cool enough, with their “draw bar” pulling air through the holes in the paper roll as it goes by, and pneumatically activating the keys. But did you ever think of how the rolls are made? 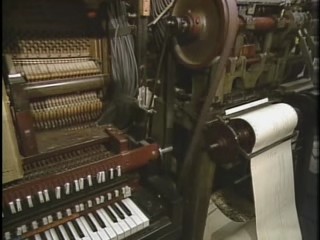 Some are made live at a recording piano which scrapes a rolling carbon-copy wheel to make scratches that will later be transferred to punches in production. But another machine lets a technician play through the piece at whatever tempo he (in this case) desires, and has hold levers that leave some notes sustained. It’s a marvel of turn-of-the-last-century engineering. And of course, rolls could be cut by hand with a hole punch.

But technology has not left the paper piano roll alone. In the mid-80s, the QRS company had computer piano-roll-editor software up and running on its Apple ][s. Indeed, their production setup seems to be sixteen simultaneous punches driven by one Apple. Modern four-axis CNC machines, eat your heart out.

If you like music, or old computers, or both, this video is a gem. Of course, we’ve seen our share of hacks that read piano rolls — here and here and even here — the physical machines, with their pulleys and wheels and wheezy pneumatic systems, are still (retro-)cool enough in their own right.

26 thoughts on “Retrotechtacular: Piano Rolls, Made By Apple ][”