The PC power supply has been a standard of the junk box for the last couple of decades, and will probably continue to be for the foreseeable future. A product that is often built to a very high standard and which will give years of faithful service, yet which has a life of only a few years as the PC of which it is a part becomes obsolete. Over the decades it has evolved from the original PC and AT into ATX, supplying an ever-expanding range of voltage rails at increasing power levels. There have been multiple different revisions of the ATX power supply standard over the years, but they all share the same basic form factor.

So a pile of ATX supplies will probably feature in the lives of quite a few readers. Most of them will probably be old and obsolete versions of little use with today’s motherboards, so there they sit. Not small enough to ignore, yet Too Good To Throw Away. We’re going to take a look at them, try to work out what useful parts they contain, and see a few projects using them. Maybe this will provide some inspiration if you’re one of those readers with a pile of them seeking a purpose.

What’s Inside The Box?

ATX power supplies follow a closely defined standard, so it should come as little surprise that many of them share very similar circuitry inside even if they come from different manufacturers. There are a variety of integrated circuits you’ll find running the show whose data sheets will often give you an entire ATX power supply schematic, but since their circuitries will often be very similar we’re showing you one of the most common.

The TL494 is a switched-mode power supply controller designed to work in a variety of configurations and manufactured by multiple semiconductor companies.

The basic operation of a switch-mode power supply is fairly straightforward, and ATX supplies have very few deviations from the norm. There is a mains rectifier and filter, a pair of high-voltage power transistors that switch the resulting DC at a few tens of kHz into a ferrite-cored transformer whose output is rectified to low voltage DC. The TL494 samples the output voltage and produces the PWM switching signal which is fed to the bases or gates of the power transistors through a drive transformer. There will also be a standby 5V supply using another small transformer, and a “power good” circuit to tell the motherboard that the PSU is ready and to activate the supply on an external input. 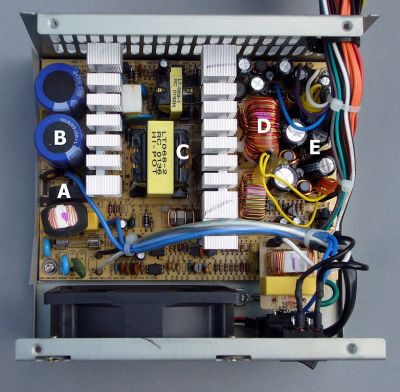 B: input filter capacitors, between B and C – Heatsink for HV transistors

C: transformer, between C and D – Heatsink for low-voltage rectifiers

These supplies are slightly unusual in the age of surface-mount components, in that the majority of them you’ll find in a junk box still have through-hole construction. This makes them suitable targets for the electronic scavenger, as parts can more easily be retrieved intact. It’s worth taking a moment to look at the components you’ll find, and suggest some uses for them.

Most obvious when dismantling one of these boxes are the metal case, IEC connector, power switch, and fan. You shouldn’t need an explanation of how these could be reused, if you don’t mind a bit of steel drilling and your project case being obviously that of a PC power supply then they are very robust enclosures. The same goes for the wiring loom of motherboard and disk power connectors, a handy source of medium-sized hook-up wire.

If you look at the components on the PCB, many of them are standard discretes. Yes, we’ve all scavenged a 10K resistor at some point, but outside a few high-voltage capacitors in general they are not much to get excited about. So what is there on that board that’s worth lifting?

One thing that’s in abundance on an ATX PSU board are magnetics. Toroidal chokes and ferrite bobbins used in filters as well as the various ferrite cored transformers. The transformers are wound for the specific purpose so unless you have the patience to rewind them they may be of little use, but the chokes have more application. These are not exotic RF ferrites but more utilitarian iron-dust cores, though they still can find plenty of use wherever a choke is required. I’ve even used them as cores for co-ax baluns, when their purpose is simply to stop RF leaking down the feeder their poor RF performance is an asset. It’s also worth noting from an RF perspective that these chokes are also a handy source of plenty of heavy-gauge enamelled copper wire for your other inductors.

The semiconductors in an ATX PSU include some specialist components, but there are still alternative applications for them. On the high voltage side are a selection of high-voltage diodes and those switching transistors, all of which are a fertile source of parts if you are hacking together high voltage inverters. On the low voltage side apart from the TL494 or other controller chip you’ll find some high current rectifiers and more than one three-terminal 78XX series regulator if you are lucky, as well as in many cases a TL431 adjustable voltage reference. You may also find the various heatsinks to be useful in other projects.

As you can see, an ATX PSU can yield some useful components. But since there is an almost limitless supply of them it’s not worth breaking one unless you need the parts, so what can you do with an intact one?

The answer is pretty simple: how about using it as a bench power supply? These supplies are not electrically the quietest or best regulated in the world, but they do have the advantage of providing several useful voltage rails at significant current levels. There is a small modification required to use one in this way, one of the lines is an enable line that is held high. Pull pin 16 low (usually a green wire) and the supply will start up. There are numerous projects on Hackaday.io showing how others have done this, and a quick search of OSH Park will yield a range of breakout PCBs like this one.

If fixed voltages aren’t enough, there have been many ATX bench PSU projects like the one pictured fitted with LM317 variable regulators on their 12V lines to provide an adjustable output. That is not the only way that this can be achieved though, the TL494 can be readily made into a variable regulator with a simple modification. The standard warnings and disclaimers apply with respect to the dangers of working on mains and high voltage equipment if you follow that route.

Of course, using a power supply as a power supply is all very useful, but it’s hardly groundbreaking even if it does sometimes involve a bit of hardware hacking. How about other uses for one? One area for which a supply capable of producing large currents might be suited for example is welding. It’s important to point out that by welding we do not mean the kind of welding you’d make ships or even cars out of, but that’s not the only place you’ll find a welder (This spot welder using just the case of an ATX supply is a fine project, but doesn’t quite count in this context). Last year for example we covered an ATX supply being used with a graphite electrode to weld thermocouples, providing a significant savings over commercial alternatives. And the metalworking potential of an ATX supply does not end there, you’ll find people using them for resistance soldering in the model making community.

So, you’ve still got that pile of metal bricks under the bench from all the old PCs that have come your way, but with luck after reading this you’ll have a bit of inspiration that may enable you to do something with them. Whatever you make be sure to share it with us on Hackaday.io, and don’t forget to send us the link!