What is the ChipWhisperer? 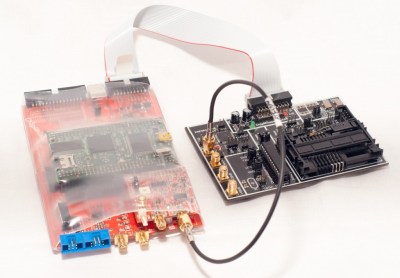 There is a problem with every crypto system on the planet. Crypto must run on real hardware, and with this comes the ability to analyze the bus, side channel attacks, and clock glitching. If you glitch a clock when a microcontroller is processing an instruction, something might go wrong. If you’re very good, you might be able to glean a little bit of information about what was happening inside the microcontroller at the time.

If a device that does clock glitching and power analysis is a bit too esoteric, there are a number of publications and hacks surrounding the ChipWhisperer to use as a real, concrete example. A few months ago [scanlime] decided she wanted the firmware from a cheap Wacom tablet. This tablet included a processor with broken out debug pins, but everything was inaccessible; the firmware isn’t available online, and trying to pull the firmware off the microcontroller is an exercise in futility.

The solution to this problem of missing firmware came in the form of the ChipWhisperer. By desoldering the crystal on this Wacom tablet and sending power supply glitches when the device was starting off, the microcontroller would keep sending out bits of firmware. With a little bit of disassembling and reverse engineering, [scanlime] was able to completely reconstruct the firmware for the device:

Of course, dumping firmware from cheap Wacom tablets isn’t the only use for the ChipWhisperer. In two years, the ChipWhisperer has gotten a lot of traction in academia, with papers ranging from ECC cryptography on 8-bit Atmel microcontrollers to clock glitching secure platforms.

Of course, like all good projects, the ChipWhisperer isn’t done. Colin is working on the ChipWhisperer Pro, a version of the hardware with a larger FPGA for more robust experimentations. The Pro version isn’t out quite yet, but with the community Colin has built, it’s sure to be a very capable tool, and remains one of the best projects we’ve ever seen in the Hackaday Prize.

9 thoughts on “After The Prize: Chipwhisperer”